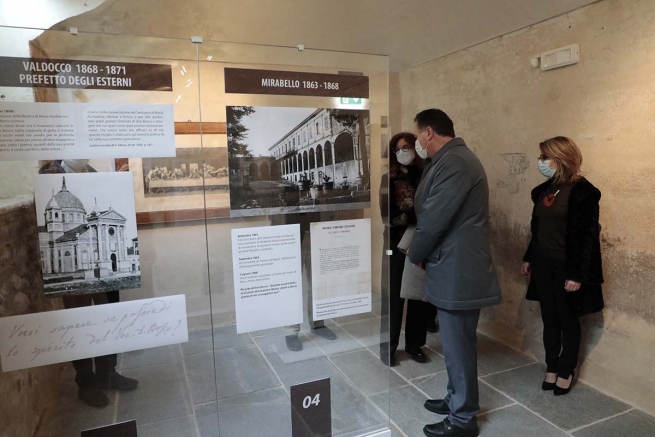 (ANS - Turin) - On Saturday 30 January 2021, after the 9:00 Mass in the Basilica of Mary Help of Christians in Turin-Valdocco, the Rector Major, Fr Ángel Fernández Artime, presided over the official presentation, at the “Casa Don Bosco House Museum”, of the exhibition entitled “Il mondo negli occhi”, dedicated to the Second Successor of Don Bosco at the head of the Salesian Congregation, Fr Paolo Albera.

During the homily of the Mass, Fr Á.F. Artime defined Fr Albera as “a great figure in his depth, sobriety, humility, goodness ...”. Then, referring to the day's liturgy, he added that “all Christian life is based on faith” and invited those present not to distort the figure of Don Bosco, making him only “a man of action”, because all his actions and his many educational activities always rested on a deep faith in God.

The inauguration ceremony of the exhibition then took place, and was also attended by the Provincial of the Special Circumscription of Piedmont and Valle d'Aosta (ICP), Fr Leonardo Mancini; the Rector of the Basilica of Mary Help of Christians, Fr Guido Errico; the Director of the “Casa Don Bosco House Museum”, Dr. Stefania De Vita; Laura Ferrari, the Deputy Mayor of None, the birthplace of Fr Paolo Albera, together with the Councilor Federico Ciaffi, who grew up in the city oratory.

After the interventions of the various personalities, the Rector Major spoke, concluding: "When we say 'Don Bosco lives today' it is because in his spirit, in what was his Salesian charism, this spirit does not disappear with his person, but there is a continuity, with one condition: charismatic fidelity. Don Paolo Albera was a 15 year old boy who fell in love with the beauty of this mission and who never would have thought he would then have the responsibility of leading the Congregation. From Don Paolo Albera until today, 100 years later, there has been an effort of continuity in fidelity to the Lord Jesus ".

Finally, to seal the inauguration, the director of the Museum and the Rector Major unveiled the entrance panel of the exhibition, depicting Don Paolo Albera in May 1901 in Meruri, Mato Grosso, Brazil, with his secretary Don Calogero Gusmano.

The exhibition can be visited online at www.donalbera.museocasadonbosco.it