RMG – "Young people are not all the same, they're all unique": worldwide commercial of the Salesians of Don Bosco "Limited Edition" 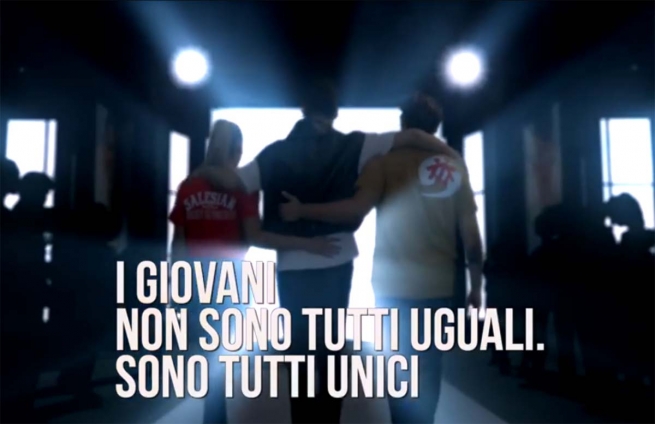 (ANS - Rome) - Yesterday, 31 January 2021, on the occasion of the Feast Day of Don Bosco, the Salesians broadcast the television commercial "Limited edition" around the world. Through it, they intend to present the educational mission that they carry out every day alongside young people with the most disparate needs and geographies, using time and effort to enhance the authenticity of each of them: unique, unrepeatable, exclusive. Because “young people are not all the same, they're all unique”, as the final slogan of the video underlines.

The advert lasts 30 seconds and presents the educational charism that still animates the mission of youth today, 133 years after the death of the Founder. Translated into 9 languages ​​(Italian, Albanian, Arabic, French, English, Spanish, Portuguese, German, Slovak) it is broadcast by the television stations of each country in which Salesians operate and by the official communication channels of the latter, and represents the launch of the awareness campaign of “Limited edition”, strongly supported by the Rector Major, Fr Ángel Fernández Artime, and coordinated by the General Economer's Office, led by the General Economer, Bro. Jean Paul Muller, SDB.

In a recent interview with Famiglia Cristiana, Italy's leading Catholic weekly magazine, Fr Á.F. Artime said: “Certainly our identity brand is young people, their education, the formation of children, adolescents. Everything else, oratory, schools, high schools or vocational training centers, shelters for immigrant children, parishes, youth centers, university institutions, are means aimed at one purpose: to prepare the young generations for life. Our educational method continues to be that of Don Bosco: the preventive system, which is much more than a pedagogy.”

The purpose of this campaign is to build and convey the digital identity of the Salesian Congregation, creating an effective and easily recognizable brand awareness on the individual platforms.

In the light of a close and careful evaluation of the different presences and different targets on the various social networks, the campaign will directly involve young people in the following weeks on the social networks they love and use most, to bring everyone the value of the uniqueness of each young individual and, in an environment of dialogue and comparison, make each young person a spokesperson for this uniqueness.

At the same time, the commercial and the campaign also constitute an opportunity for the Salesians to reach and reach out to the world of young adults, adults and parents to be recognized as an educational agency that works alongside them for the growth of young people.

The Salesians in the world are the largest educational organization dedicated to youth formation and evangelization. Founded by St. John Bosco, a nineteenth-century Italian educator saint, they are present in 134 countries with 1,802 Salesian Institutes characterized by oratories, schools and Vocational Training Centers.

The commercial is available on Youtube in various language channels at ANSChannel.