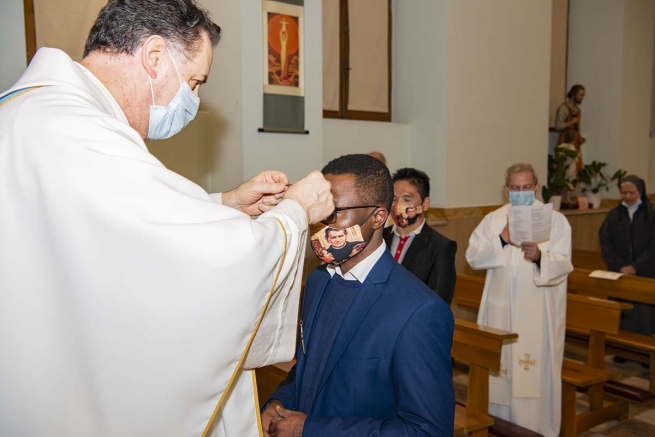 (ANS - Rome) - Missionary sending is traditionally done in the Basilica of Mary Help of Christians in Turin at the end of September. Due to Covid-19, the missionary dispatch of the 151st Missionary Expedition was postponed after Easter. As the health situation continues to be precarious, an "Extraordinary Missionary Sending" was thought of. It is extraordinary because it was celebrated in the chapel of the Salesian Headquarters and because not all the members of the expedition were physically present, but the missionary spirit was the same that animated all the missionary expeditions.

Thus, yesterday evening, Monday 1 February, the Rector Major of the Salesians (SDB), Fr Ángel Fernández Artime, presided over the Eucharist, which was also attended by the Mother General of the Daughters of Mary Help of Christians, Mother Yvonne Reungoat, the Councilor for the SDB Missions, Fr Alfred Maravilla, the Councilor for the FMA Missions, Sr. Alaide Deretti, their teams and a small representative group of Salesians and FMA, in accordance with the health protocol in force.

During the Eucharist, in a simple and evocative ceremony, the Rector Major blessed the missionary crosses and gave them to the 2 Salesian missionaries present, while another 22 are in their respective countries, waiting for the cross and the visa to leave for their mission lands. There are 24 new Salesian missionaries on this 151st expedition.

Mother Reungoat also delivered the crosses to the 7 FMA of this missionary expedition - and two other missionaries have already left. “Like every year this reality of the new missionaries is a great gift,” Fr Maravilla underscored.

In his homily, the Rector Major narrated his personal experience as Provincial in Argentina, where he touched the places that testify to the challenges the first missionaries had to face in Patagonia, places that today invite humility and fidelity. “I am deeply convinced that if Don Bosco had not had the missionary spirit, today our Congregation would probably be just a small Congregation with few and old members.” He also stressed that “it is the missionary spirit that has made Don Bosco's charism universal and alive.” Before the final blessing, Mother addressed the assembly emphasizing the “missionary spirit as an important dimension of the Salesian charism.”

The crosses will now be sent to the Provinces of the missionaries, where the Provincials, in the name of the Rector Major and Mother General, will hand them over to the missionaries in the course of simple celebrations. They will thus leave from their own Provinces for their mission destinations, according to the possibilities and according to the health protocols of the various countries.

In the meantime, the preparatory process for the selection of the members of the 152nd Salesian missionary expedition began in September 2021.