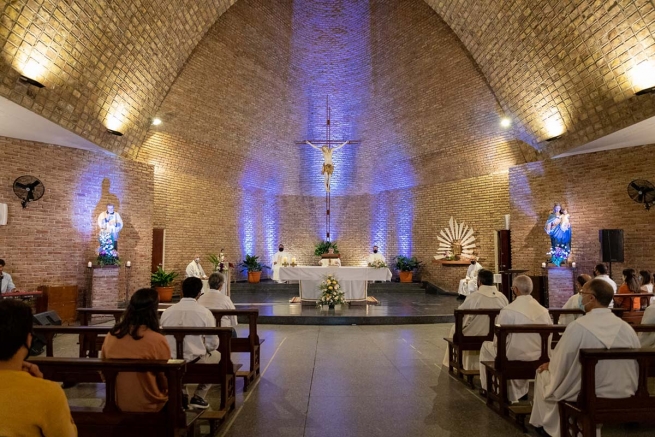 (ANS - Montevideo) - The Salesian Family of Uruguay celebrated the feast day of its founder on Sunday 31 January, inviting people to "wink at hope" in the face of the pandemic that all humanity is having to deal with. This year, the traditional and crowded celebration was virtual, but kept all the usual ingredients: music, celebration of the Eucharist, and a space for joy and laughter.

At 8 pm local time, the broadcast on the Youtube channel and on the Facebook page of @salesianosuy began with two young people who welcomed the participants and, without ignoring the reality of today's life, encouraged them to recognize the small signs, the “wink of an eye” that God continues to do in the current situation: the many services rendered by young people in oratories, in soup kitchens, in families for the elderly and in a thousand other areas. Then, in the same spirit, they invited everyone to enjoy the different activities of the celebration.

First, the video of the song "Habla, Señor" (Speak, Lord) by the Catholic musical group Ecos, premiered on this occasion, was shared.

Then began the Mass presided over by the Provincial of Uruguay, Fr Alfonso Bauer. “Today we have to celebrate this feast in a time of pandemic ... We can fall into the temptation to complain ...,” Fr Bauer began, but then he invited everyone to look at the reality in which we live “with the eyes of faith”, and added: “Believing does not mean finding easy solutions. But in the midst of life's storms, we need not be afraid to give God the helm of our boat. Sometimes we would like to have everything under control, but the Lord always has a broader vision… ”. Then the Salesian Provincial recalled that the Salesian Family exists “to revive Don Bosco's dream” and finally invited each participant to entrust themselves to Mary Help of Christians, “Our Lady of difficult times.”

During the Mass there was still time for a greeting to Sr. Laura Guisado, FMA, who has finished her mandate as Provincial; for the renewal of the religious profession of Salesian Wilson Prestes, a 27-year-old Uruguayan in the second year of formation; and for the missionary sending of Alma Rodríguez, a 20-year-old of the Salesian Missionary Volunteers, who was destined to Tijuana, Mexico, for a year of volunteer work.

At the end of the Mass, a video of the song "Nos mueve la esperanza" was shown, inspired by the Strenna of the Rector Major, a co-production by the Argentine Alejandro Fernandez and the Uruguayan Salesian youth group "Aristophanes". And the evening of celebration ended with the last "wink to hope" through the performance of the well-known comedian Diego Delgrossi, who managed to make people laugh with a monologue on the pandemic.