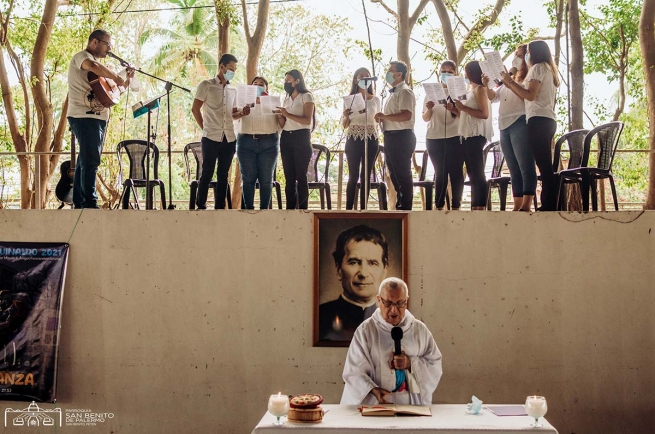 (ANS - San Benito Petén) - The city of San Benito Petén, in Guatemala, hosts an important Salesian mission, strongly rooted in the territory and appreciated by the local population, mostly poor people, because they are committed to bringing development and authentic evangelization. This is how the Feast Day of Don Bosco was experienced.

Celebrations began on January 22 with the start of the Novena in honor of the Saint of Youth; a novena which, like all other activities this year, was affected by the restrictions due to the Covid-19 pandemic, but which thanks to the commitment of its promoters - Salesian Youth Movement (SYM), members of the Association of Mary Help of Christians, Salesian Cooperators, catechists… - was carried out effectively both in presence and with digital connections.

The climax of the celebration, however, certainly took place last Sunday, January 31st. Throughout the day, from 5 in the morning to 8 in the evening, the temple and the structures of the Salesian parish were animated by the activities. Six Eucharists were celebrated during the day.

The most meaningful ones for the community were two: in the morning, the one during which the "delivery of the mandate" to all the parish's pastoral workers took place: catechists, liturgical animators, extraordinary ministers, altar servers, members of the choir and of the various teams of pastoral workers, volunteers from every sector and mission of the numerous, varied and articulated Salesian reality of San Benito Petén. Precisely because of the large number of people involved, this Mass was not held in the church, but in the larger parish hall.

In the afternoon, however, the specific Mass for the youth of the SYM was celebrated, which was so much waited for and desired by its members that the young people, in the face of the limitations against crowding the available spaces, began to book seats in the church starting 15 days before.

After the Mass, the children, teens and young people present experienced a space for meeting, fraternity, prayer and reflection, culminating in an evening shared with all those present during which the video of the Rector Major's Strenna for 2021 "Moved by hope: 'See, I am making all things new' (Rev 21,5)" was presented.

Also, in the afternoon, again as part of the Salesian celebrations, a preview video about the death of Don Bosco was also released on Facebook. The 4-minute film presents some scenes from the first film made on St Giovanni Bosco, produced in 1936, by the famous Italian director Goffredo Alessandrini.

The feast day demanded a lot of energy from many people, but the love for Don Bosco in that land is great and so widespread that everyone was enthusiastic to participate. As one of the parishioners commented, "we give thanks to God and His Holy Church, because for 8 years and seven months now, through the 'Youth Parish', He has given Don Bosco to San Benito Petén."