Philippines – “Getting to Know St. Francis of Sales”: a Series of Talks 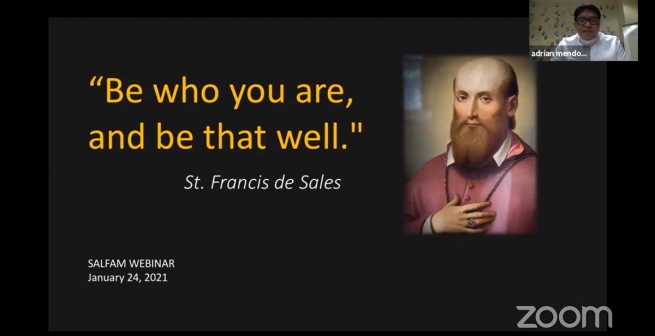 (ANS – Cebu City) – The Salesians of Don Bosco and the Salesian Family as a whole were always known as the children of Saint John Bosco, the Father and Teacher of Youth. Yet, behind this great Saint is another who plays a discreet part yet possesses an equal importance in shaping the life of the Salesian Congregation as we know it —St. Francis of Sales.

Too long has this great-among-the-great remained hidden in the backdrop of Salesian Spirituality which ironically and providently bears his name. That is why on his feast last January the 24th the FIS Province, through the Office of Social Communication, initiated the 1st of a series of talks, which will go on in the next months and which explored the life, lessons, and legacy of St. Francis of Sales. What started out as a simple webinar ended as a virtual gathering of the Salesian Family as different groups participated via Zoom and Facebook live. It was hosted by Ms. Patricia Farrarons, a member of the SYM, and Mrs. Carol Gatchalian, a lay mission partner of DB Clay.

The first talk delved into the Person, Life and Teachings of St. Francis of Sales. Fr. Adrian Mendoza, SDB, the speaker for this particular event, who studied the subject in Berkley, California, presented a very profound interpretation as to who St. Francis was and as to what he taught and represented. He focused his exposition on the “little virtues” and puts forward St. Francis’ famous saying which unsurprisingly resembles Don Bosco’s own: “be who you are and be that well”. The hour long gathering ended with a Q&A segment and a good night talk by Fr. Godofredo Atienza, SDB, Provincial Superior of FIS.

As the first in a series, this talk by Fr. Andy catapulted the Province’s preparation for the 400th year celebration of the death of St. Francis of Sales which will be celebrated next year, 2022. It is the aim of the Province to equip the Salesian family with knowledge not only about Don Bosco, but also about St. Francis of Sales, his patron.

The organizers hope to see a massive digital gathering again on the 2nd part of this series, which will be held on February 24th.