Nigeria – Even in times of pandemic, the Salesian care for former street children goes on 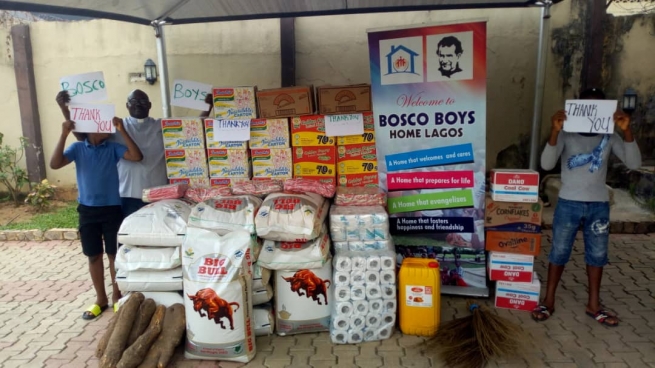 (ANS – Lagos) – The Don Bosco Child Protection Centre in Lagos, Nigeria, is able to provide ongoing support for 25 boys thanks to funding received from Salesian Missions, the U.S. development arm of the Salesians of Don Bosco. The centre provides care for boys, ages 7 to 15, who were living on the streets, had faced physical abuse in their homes or were rescued from child trafficking.

The funding from Salesian Missions provided tuition and skills training, counselling and psychological care, medical care, and clothing for the boys. Some funding also went to support the operational expenses of the centre for such items as fuel, internet access, stationery and toiletries.

With the high rate of domestic violence, child abuse, poverty and negative environmental influences, many youth are living on the streets in Lagos and fighting to survive. Many have turned to crime, drug abuse and other risky behaviour. These youth have been denied the opportunity of proper parental training, family love and even education. The Don Bosco Child Protection Centre supports these youth, bringing them off the streets, giving them access to education and skills training, and instilling hope for a brighter future.

“Because Lagos is a major city, there are many youth who come looking for greener pastures including some who have run away and think they will find work and money,” said Father Augustine Okeke, director of the Don Bosco Child Protection Center. “Once they get to Lagos, they realize they have nothing and end up living on the streets. We help them by creating a family for them so they feel loved and supported. They have a safe place to live and gain an education and skills.”

Youth are first met on the streets in their own environment and provided moral and psychological support. After the first contact, the centre collaborates with the rescue team, which includes police, the child protection office, welfare and the court, to bring youth to the Don Bosco Child Protection Centre. The centre is run by Salesian staff including two social workers, two teachers, a counsellor, house staff, and administrative staff.

Once youth are in the Don Bosco Child Protection Centre, they are provided counseling, skills training and daily support. The goal is to help prepare them for the next stage of life. Family reunification takes place later if it is possible. Salesian staff work with the family and each boy to help reintegrate him into family life and then follow up with the family to ensure that all is well and address ongoing challenges.