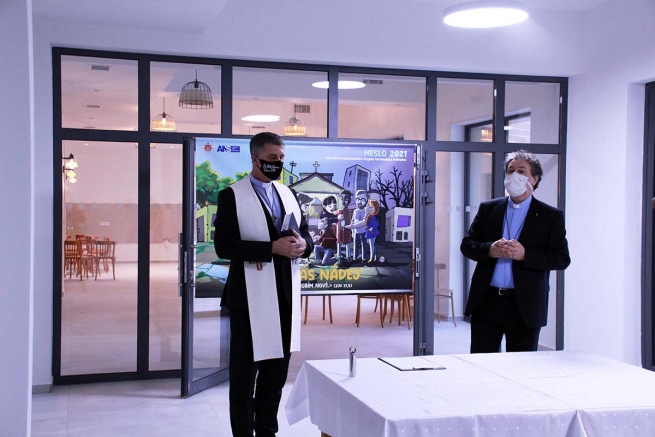 (ANS - Bratislava) - The Salesians of the Bratislava-Miletičova work at the provincial house of Slovakia celebrated the Feast Day of Don Bosco with the blessing of the rooms in their new oratory.

The spaces for youth meetings, games, the tea room and the chapel are located on the first floor of the Salesian house. In addition to having been completely renovated, they have been flanked by a brand new terrace, and the environment for the life of the Salesian community was also rebuilt.

Thirty years after the reopening of the Salesian center in Bratislava-Miletičova, there are now spaces fully suitable for youth activities. Until 2019, in fact, young people gathered with the Salesians in the spaces originally built as garages and recovered after the collapse of communism.

The local oratory is one of the largest in Slovakia, being attended by more than 400 young people and families. And the work does not stop there: the construction of a new gym and sports fields is also planned.

“The environment of the new oratory is a miracle and also a dream of God,” said Fr František Kubovič, Director of the Miletičova house, who in his speech also recalled the first projects for the oratory and the setbacks that followed over the past 20 years. “On 19 August 2019 the Salesian community withdrew from the environments that are today renewed. On 4 October, the demolition and moving of the rubble began, thanks also to the help of many parents and young people. Then a construction company began the reconstruction work, which lasted almost a year. On 10 November 2020, the reconstruction was finished with a positive and final approval,” he then added.

Fr Kubovič concluded by demonstrating with a living faith that the oratory will serve the integral progress of young people, especially in their growth in faith. “Here we will have the chapel, a kitchen, and a room for mothers with children.”

The renewed environment was blessed by the Provincial, Fr Peter Timko, who expressed his desire “that this structure be lived with the spirit of Don Bosco, that is, to always be concerned about the salvation of souls.”

In the new oratory there is still some work to be finished; but after the times of the pandemic and all the lockdowns, these environments are ready to serve the young recipients.