Argentina – Don Bosco: symbol of a Church that looks to the South 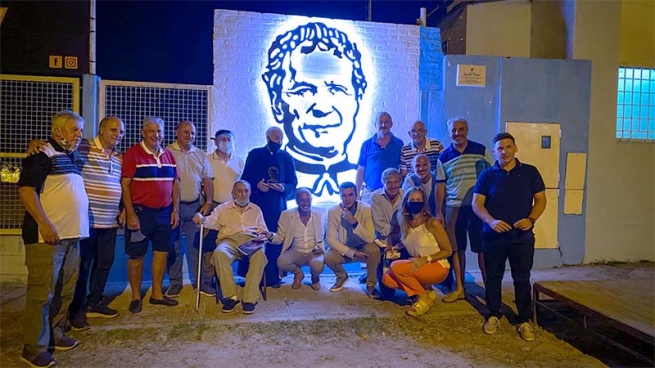 (ANS - Paraná) - The Father and Teacher of young people, Don Bosco, was once again honored with a work of art that highlights the features of his face through solid materials and a play of lights. Located on an external wall of the Don Bosco Past Pupils Center in Paraná, Argentina, the work is part of the project "The symbolism of the Church that looks to the South", promoted by the artist Alejandro Marmo and approved by Pope Francis.

Born in Buenos Aires in 1971, Marmo is an artist active in the plastic arts, both a job and a passion that he has cultivated since his youth. In his works, the artist usually involves workers and people who belong to socially excluded sectors, and uses as raw material elements taken from abandoned factories in the suburbs of Buenos Aires.

His objective is to bring people together and integrate them through art, understood as a representation of a culture.

This artistic vision of his was born in him in the mid-1990s, and took the name of "Art in the factories". It is no coincidence that the works produced as a result of this process are placed in public spaces, since for the artist it is there that they take on their real dimension and in this way, moreover, the other creators of the works can also reinforce the meaning of belonging with the work of art created.

In more recent times, and with the approval of the Argentine Pope, Marmo has launched the project "The symbolism of the Church that looks to the South". It is a matter of placing works of art that represent popular expressions of the faith in different parts of Latin America. They serve to build bridges, to connect those realities with the Church and the Holy See, the center of the Catholic faith in the world. For this reason, in November 2014, two works by the same artist were installed in the gardens of the Vatican Museums: The Virgin of Luján and a sculpture from the “Christ the Worker” series.

Alejandro Marmo represents the life of ordinary people, saints, religious and figures who have changed the course of history with their ideas and their courage to fulfill them.

In this sense his goal is to elevate the human soul so that men are better, more sensitive, virtuous and enriched in knowledge, and in a weave of wires, cables, sheets and iron, his vision of art becomes culture and becomes a meeting point for people from all over the earth.

His art is ultimately rooted in life because his purpose is to transform and improve human beings.