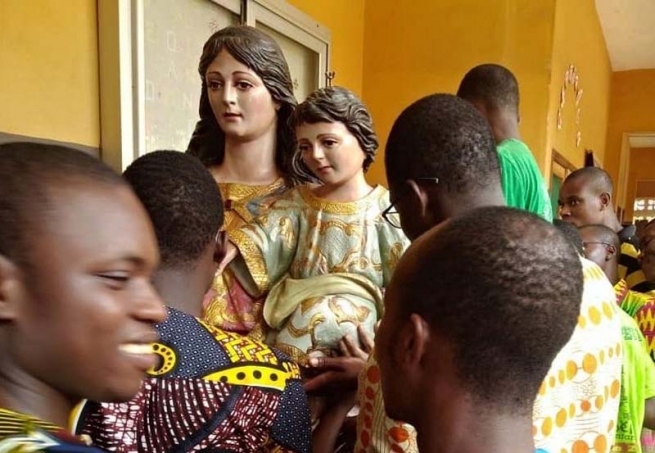 (ANS - Porto Novo) - On 1 February last, a statue of Mary Help of Christians from the Salesian house in Córdoba, Spain, reached the Salesian community in Porto Novo, Benin. The arrival of this sculpture, which was welcomed with great joy and much-awaited for by Salesians, young people and street children, represents a significant tribute to the memory of the late Salesian Fr Antonio César Fernández; yesterday, 15 February 2021, marked two years since his tragic death.

The statue was made 25 years ago in Spain with the idea of ​​replacing the statue that had presided over the altar of the Shrine of Mary Help of Christians in the traditional procession of May 24th in Porto Novo since 1908. With the passing of the years, however, it was considered more convenient that the original image was the one that received worship at all times - both during the year in the church and in the procession of the feast day - and so the new statue to be placed in the community's private chapel was finished.

During the last visit to Spain of the Salesian missionary Fr Antonio César Fernández, a native of Pozoblanco, in the Autonomous Community of Andalusia, expressed the desire to have a statue of Mary Help of Christians of that type in Porto Novo, in the community of the pre-novitiate. After his tragic death, which took place on 15 February 2019, killed by three gunshots about 40 kilometers from the southern border of Burkina Faso, the Salesian community of Córdoba saw the possibility of sending this blessed statue and thus fulfilling his wish - a desire that came to fruition also thanks to the organization of the trip by the Salesian Mission Office of Madrid, “Misiones Salesianas”.

The statue of Mary Help of Christians is the work of the Cordovan sculptor Marco Augusto Dueñas Cepas. It was commissioned on 15 July 1994 and was delivered to the Salesian community of Córdoba on 19 March 1995, being officially blessed during the Eucharist on 24 April of the same year.

“For us it is a reason for joy to make this donation to the Salesian community of Porto Novo, more than 25 years after its blessing. May the image of Our Lady, which was blessed in the same place where our brother Antonio César received the missionary crucifix, now be a sign of communion in these lands. She unites us and makes us feel more brothers,” declared the Director of the house in Cordoba, Fr José Antonio Perdigones.

Two years after the death of Fr Fernández, his African confreres still remember him with great affection and gratitude and say: “We pray for the eternal repose of Father Cesar’s soul and above all for the conversion of these people who continue to make our world more fragile.”