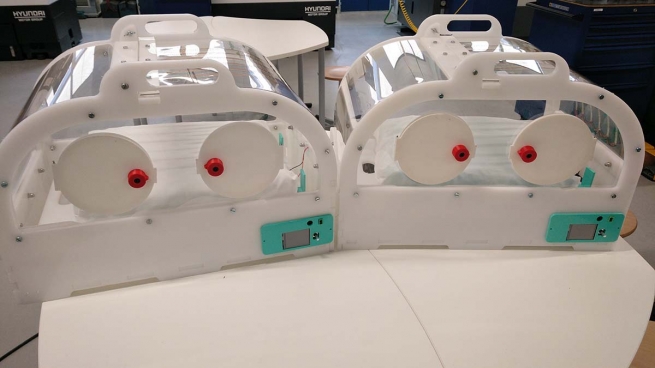 (ANS - Pamplona) - The Mechanical Department of the Salesian Institute of Pamplona, ​​in Sarriguren, as part of a project carried out in collaboration with the NGOs "Medicina abierta al Mundo" and "Ayuda a Contenedores", has produced two special incubators, intended for premature babies in Cape Verde.

It all started last September when Dr. Pablo Sanchez, an engineer of the Public University of Navarra (UPNA) and volunteer of "Medicina abierta al Mundo", visited the Salesian school to present a project for the manufacture of incubators for developing countries to the students of the Mechanical Department.

The "In3" project, in truth, had already been conceived in 2014 with the ambitious purpose of sharing information and projects on the Internet for an incubator with free access and open hardware for all, so that those who wished could create valid incubators for children born prematurely.

The first prototype was designed and published in June 2015 as a thesis of a Master in Biomedical Engineering by the young Alejandro Escario, a prototype that soon after, thanks to several contributions, was already evolving and improving in many of its features. Over time, a multidisciplinary work team was created that was responsible for perfecting each module of which the incubator is composed, making "In3" a model that is more robust, economical and easier to produce and repair.

The proposal to build incubators reached the Salesians of Pamplona from the NGO "Ayuda a Contenedores", an organization historically linked to the Salesians.

“After presenting the initiative to the teaching staff, we set to work to adapt part of the study program to the manufacture of incubators. For now, we plan to produce six, which will then be sent to various African countries through 'Ayuda a Contenedores'. Teachers and students have started an exciting journey, which will surely help many children to move forward and us to look inside and create a more just world,” the members of the Mechanical Department of the Salesian institute explained last September.

Now the first two incubators have already seen the light and are on their way to Cape Verde. The container transporting them will leave Pamplona next Saturday, February 20.

“For teachers and students it was a great challenge to produce and work pieces in a material we are not used to and with the center's new machinery, and moreover, with the satisfaction of helping those children of developing countries born with particular problems. Because the Salesian Institute in Pamplona has always been committed to helping people in difficulty,” concluded Alfonso Gordillo, Head of the Mechanical Department of the Center.

Given that the adapted curriculum was found to be valid both for producing incubators and for training students, the idea is to make the new study program permanent and collaboration with other centers is being considered.

A report on this story is also available on the web, produced by the local TV Navarra televisión.