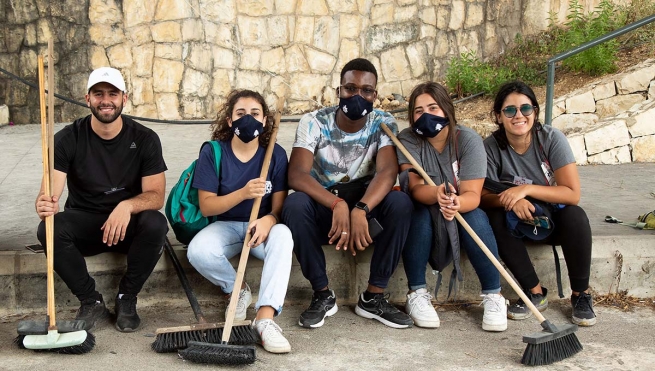 (ANS - Beirut) - The terrible explosion that devastated Beirut last August 4 brought the country's economy to its knees and many families lost their homes and their belongings. The Salesian Mission Office "Missioni Don Bosco" in Turin was immediately active in supporting the local Salesians and, thanks to the help of many benefactors, restored a little serenity and comfort to 189 families.

Lebanon, a country already devastated by a complex and long socio-political and economic crisis, subsequently aggravated by the Covid-19 pandemic, suffered a huge catastrophe. The explosion, probably caused by a fire inside an abandoned ammonium nitrate deposit in the port of Beirut, razed the entire surrounding area to the ground and destroyed most of the adjacent neighborhoods.

During the first two days after the explosion, the flow of ambulances was constant, the capital's hospitals were literally in crisis. The health system, already strained, perpetually struggling with the lack of electricity and medical supplies, had been put under further pressure due to the Covid-19 emergency, and found itself having to face the disaster of the August 4th in the worst possible situation.

In this context, the Salesians of Lebanon immediately worked to respond to the numerous requests for help. The emergency plan mainly focused on the distribution of basic necessities, food and medicine, hospitality, economic assistance to a group of 189 families whose homes or work activities suffered considerable damage; the Salesians also provided the financing of scholarships for boys and girls.

The support sent by Missioni Don Bosco to the Lebanese mission, thanks to donations from benefactors, was aimed at giving a response as quickly as possible. An assistance and rescue plan, with the aim also of alleviating and mitigating the socio-economic impact, sense of loss and upheaval following everything that happened.

The emergency project was divided into 5 categories, with some families receiving more than one type of support):

-      welcome and meals for 24 Syrian and 48 Iraqi families, families who were hosted in the Al-Housson hospitality house.

To revive the fortunes of Lebanon, all this is certainly still little. But to restore the smile to many children, teenagers and young people and a little serenity to many parents, Salesian help is essential.