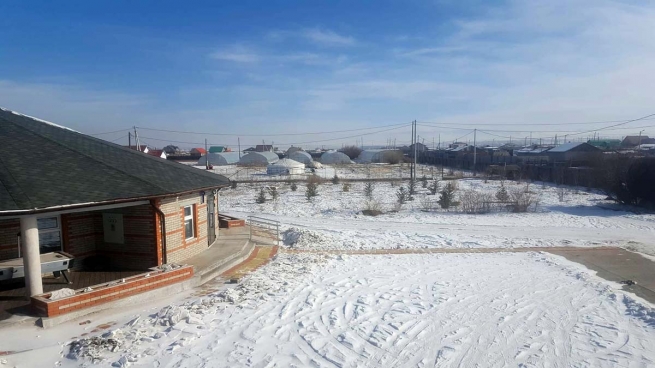 (ANS - Ulan Bator) - The Salesians took over the pastoral care of the mission of Shuwuu, not too far from the capital of the country, Ulan Bator, in 2016, on the proposal of the then Vicar Apostolic of Mongolia, Msgr. Wenceslaus Padilla. “When we first arrived there, we had just four gers (traditional Mongolian round houses) at our disposal. Yes, it was difficult to start apostolic activities without a solid infrastructure. We used two ger joined together as a chapel, a small ger was for the parish office and the other ger was for the kitchen,” says Salesian Fr Mario Gaspar dos Santos from Timor, who has been serving in Shuwuu since last year.

Noting, then, that in that way they did not have an adequate place to live, nor an adequate place to offer people to pray, given that during the winter the chapel built in the gers was extremely cold, the Salesians got busy: they renovated a two-story building and created a chapel, an indoor games room, a library, a shower made available to people and even a computer room.

In fact, as the Salesian missionaries quickly learned, in Mongolia the two fundamental elements of a building are heating and water. “Since we have a well, it was easy for us to connect it to the building. But for the proper functioning of the structure and the parish we also need heating. Thus, we also connected the electric heating,” the Salesian continues. Of course, given the temperatures that are reached in Shuwuu, the bill is very high: about 2,000 dollars a month, during the winter.

Trying to limit expenses so as to use the money saved for educational and pastoral purposes, the Salesians contacted a benefactor in Hong Kong, who said he was willing to donate a system of solar panels. The entire installation of the system and commissioning should have already taken place last year, but due to Covid-19 the project has been postponed. But once fully operational, the solar energy system will make it possible to produce heating for both the two-story building and the new church inaugurated last autumn.

But this is not the only "ecological" project of the Salesian community in Shuwuu, which has decided to plant 50 trees every year. “Planting trees in Mongolia is not easy. We need a good irrigation system, which we started three years ago precisely to make the trees survive. It was the young people of our parish who planted the trees and the whole community is committed to promoting the planting of new trees every year,” said Fr dos Santos.