Czech Republic - A year dedicated to the memory of Fr John Med, a Czech missionary in India 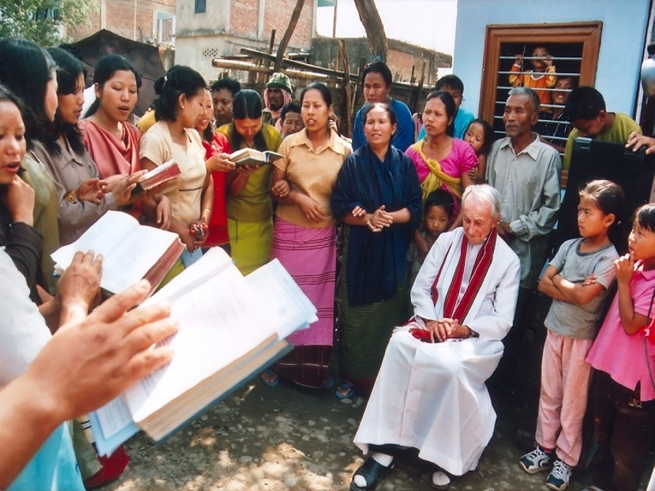 (ANS - Prague) - Each of the 11,000 Salesians who have been sent as missionaries ad gentes since 1875 has left a precious legacy in his homeland and also in his mission land. And Fr John Med, a Czech Salesian missionary in India (1924 – 2011), is no exception. Fr Med is a model for every Province, that it always preserves the memory of its "legendary" missionaries.

This year the Province of the Czech Republic (CEP), his Province of origin, launched "The year of Fr Med". This is an initiative launched on the provincial website and shared by the Salesians in India to treasure the memory of Fr Med through his books of songs, testimonies, biographies and numerous videos available on the "Divine Echoes" YouTube channel.

Every month, the Czech Republic's Province shares an aspect and a story on its web portal regarding a certain period of Fr Med's life. In January, an in-depth study entitled “A priest on a moped, the friend of the poor", while in February his childhood was examined through the video "His name is John: childhood and family". From March it will continue with the publication of many other documents, photos and short videos. In this way, it will be possible to deeply understand the missionary vocation of this Salesian who did not hesitate to leave his homeland to dedicate himself to others.

Currently, there are not many elderly Salesian missionaries in the East Asia-Oceania Region and it is therefore important to treasure all their vocational stories. It is essential to dialogue with them, to record their words and pass on their testimonies, so that they are a motivation for the current young Salesian generations.

To learn more about Fr Med's story, you can consult the section dedicated to him on the website of the Salesians of the Czech Republic and watch the documentary "Singing Missionary", organized by the Salesian Province of Dimapur (IND).

The videos of January and February are available at the following links: "A priest on a moped" and "His name is John".