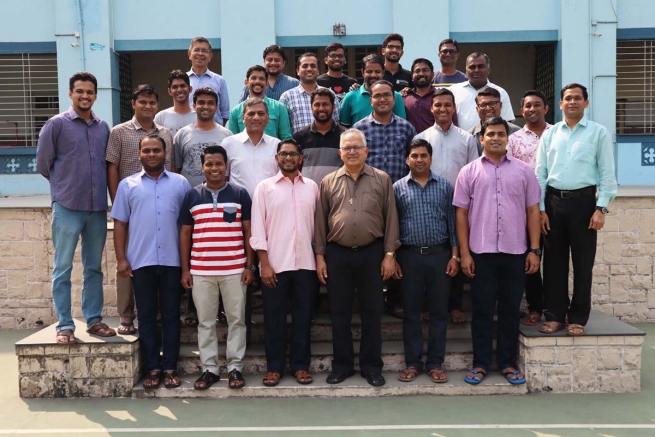 (ANS – Mumbai) – The priests and brothers of the quinquennium of the Mumbai Province have gathered in the Provincial House at Matunga (Mumbai) for their annual course of animation. The 25 participants began the four-day course on 22 February 2021. On the second day, Fr Ivo Coelho – the General Councillor for Formation – addressed the participants. He began his session by listening to the participants share their experience of their first few years of active ministry as priests and perpetually professed brothers. Fr Coelho acknowledged the growth in experience and maturity that he noticed in the Salesians, many of whom he knew during their years of initial formation.

Based on the sharing of the Salesians, Fr Coelho invited the participants to reflect on three aspects. He began by comparing the period of the quinquennium of their ministry to the quinquennium of the priestly ministry of Don Bosco. He told the young Salesians that Don Bosco spent the first three years of his priesthood at the Convitto Ecclesiastico where along with moral theology, canon law and pastoral experience, he was taught to reflect on his ministry. He said that every Salesian ought to imitate Don Bosco in reflecting on their ministry, and this should be done in faith. Quoting article 119 of the Constitutions of the Society of St Francis de Sales, he encouraged the Salesians to listen to the voice of the Spirit while immersed in the apostolate, and in the midst of the poor.

Secondly, he asked the young Salesians to clarify their notion of being ‘Salesian religious’ priests. He said this in the context of clarifying that pastoral ministry for a Salesian is much more than merely the administration of the sacraments. He said, “Don Bosco began a new way of being priests.” While it included the practice of the evangelical counsels, it necessarily included living in community and participating in the mission. He emphasised the primacy of the Christian vocation to be Alter Christus. He stated that ministerial priesthood was thus, secondary, and an office of service, and not dominance.

Finally, he encouraged the young Salesians to not only offer accompaniment to youth, but also seek accompaniment from a spiritual guide. He reminded the Salesians that Don Bosco had the gift of counsel, and was a guide to many youth. However, he also sought guidance from Joseph Cafasso who was his spiritual guide. According to him, along with the sacrament of reconciliation, spiritual direction is extremely important for every Salesian to grow during the period of on-going formation.

He then responded to the various queries of the participants. This included diverse topics like the vocation of the Salesian Brother, having non-Salesians as spiritual guides, the issues faced by young Salesians in the area of affectivity, and maintaining one’s identity as educator-pastors in the digital world.