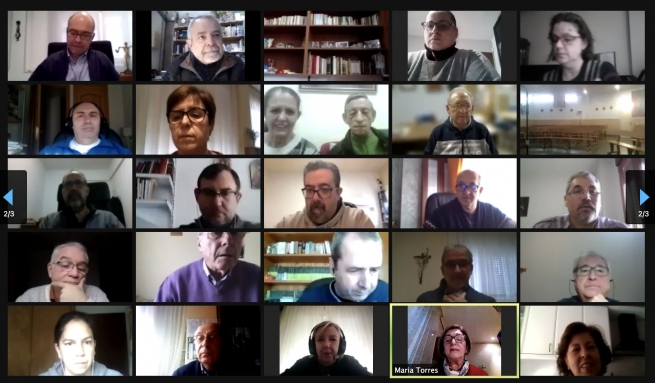 (ANS - Madrid) - The Congress of the Salesian Parishes of Spain took place online on 19 and 20 February, created to give continuity to the journey begun with the similar congress in 2017 and inspired by the National Congress of the Laity which took place in February 2020, at the instigation of the Spanish Bishops' Conference.

The event of this past 19-20 February served to share the work carried out by parish priests and lay people under the motto "The Salesian parish, outgoing people of God", and also provided an opportunity to offer good practices and testimonies relating to the paths envisaged by the Congress of the Laity.

The meeting, which began on Friday 19th at 11:30 am, had as its main presentation the one entitled "A welcoming, close, empathetic and collaborative priest" offered by Msgr. Antonio Vadell, auxiliary bishop of the archdiocese of Barcelona. On Saturday the meeting continued with the report "The parish within a Salesian work", held by the General Councilor for Salesian Youth Ministry, Fr Miguel Angel García Morcuende - who encouraged those present to rethink the present and the possibilities parishes in the light of the Salesian charism; and continued with the speech "People of God going out: memory and future of the Congress of the Laity", by Ana Medina.

“We need creativity, the noisy presence of young people. Being a friendly face of the complex reality of youth. It is up to us to accompany and awaken young people, so that they may be the prophets of this time,” explained the General Councilor in his speech. Which concluded by saying: "We must build the house on the rock, a house that is the community of God, aware that if the Lord does not build the house, our efforts will be in vain, but also aware that God needs workers to send out."

According to the National Coordinator of the Salesian Parishes, Fr Miguel Angel Calavia, the objectives of the meeting were to make the reflections of the National Congress of the Laity become concrete in the Salesian reality, reflect on the identity and mission of parish priests and, finally, offer good practices and testimonies relating to the paths identified in the last Congress of the Laity.