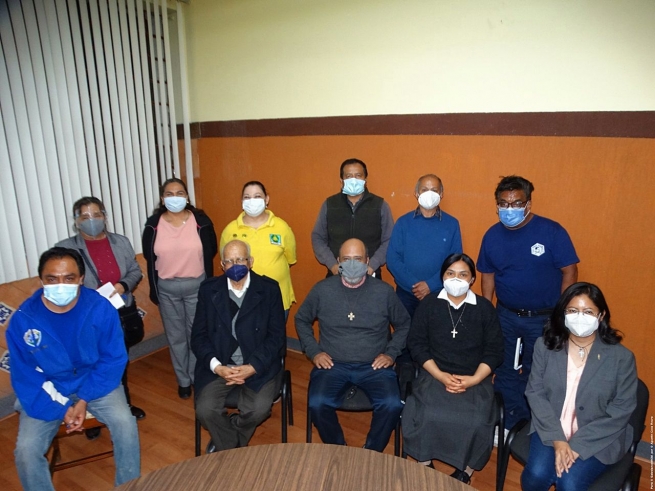 (ANS - Puebla) - Fr Hugo Orozco, Regional Councilor for Interamerica, began an Extraordinary Visitation to the Province of Mexico-México (MEM) in the middle of last month on behalf of the Rector Major, Fr Ángel Fernández Artime. As part of the various stages of the visit, on Saturday 27 February, he met the representatives of the Salesian Family present in the State of Puebla in the city of Puebla: Salesians, Daughters of Mary Help of Christians, Salesian Cooperators, Past Pupils, Volunteers of Don Bosco and "Damas Salesianas".

In his meeting, held in person since the restrictions due to the pandemic were partially eased in those days, Fr Orozco first met and greeted all the representatives of the various groups, praising them for their commitment and encouraging them for future work.

Then, he highlighted the great work done by the various groups of the Salesian Family in their different areas of intervention, as well as the valid, diverse and widespread initiatives with which they responded to the health emergency that affects the whole world. In this sense, he underlined, by way of example, the great work carried out by the Salesian Cooperators of the Interamerica Region through the program "Vamos en la misma barca" (Let's move forward in the same boat), which brought together - and brings together - thousands of volunteers and which put the Salesian world, including from other Regions, in contact with the Rector Major, thus giving a sense of unity to the work of the Salesian Family.

Subsequently, referring to the message of the Rector Major's Strenna for 2021, "Moved by hope: 'See, I am making all things new' (Rev 21,5)", he shared some ideas with those present. First of all, he clarified that hope is not a blind optimism "that things will go well ... Our hope has a lot to do with our faith, that is, with the conviction that God does not leave us, that He accompanies us, that even in that step that is darker there is a little light that makes us walk.”

He then spoke of the “places of hope”, that is to say of those sources proper to the Salesian charism where members of the SF can find hope, and then share it with others, especially with those who need it most.

He identified the first of these places in friendship, a proper Salesian experience, because, he said: "We provide the possibility, we ensure the possibility for people to become friends, for boys, girls ... We as educators want to become their friends to promote them.”

The second he identified in the "maybe" or "who knows" of Don Bosco, as of Fr Luigi Variara, of Mother Mazzarello ... of all those great saints and founders, who were able to open new opportunities starting from a small glimmer of possibility. Like Don Bosco who, coming out of the “Generala” juvenile prison in Turin, asked himself: “Who knows, had these youngsters had a friend outside…”. "There are two places of hope for us in the Salesian Family: friendship and perhaps those that allow us to glimpse a different panorama," concluded Fr Orozco.