Iraq – Pope Francis: "God is merciful and the most blasphemous offense is to desecrate His name by hating our brothers and sisters" 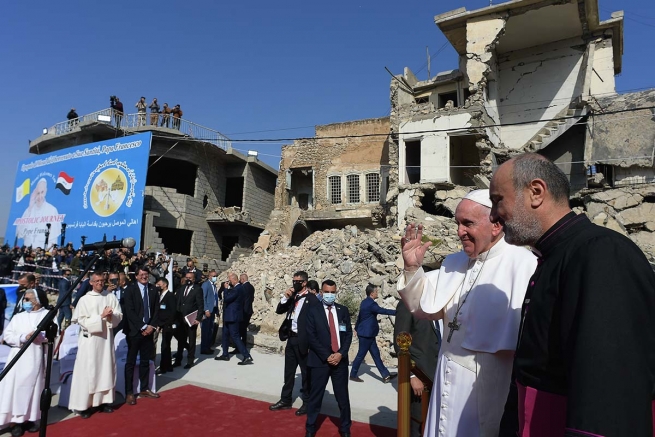 (ANS - Baghdad) - A journey to bring hope to an entire people; a journey to the roots of the Abrahamic religions; a journey to reaffirm the value of brotherhood among all peoples: there are many readings that can be given to Pope Francis' trip to Iraq. A little more than three days, but which will remain engraved in the history of the country, of the pontificate of Pope Francis and in his personal life. As he said while greeting the crowd at the "Franso Hariri" stadium in Erbil: "Iraq will always remain with me, in my heart".

As pastor of the universal Church, in the first public meeting, the one with the Iraqi bishops, clergy and religious communities, on Friday 5, in Baghdad, the Holy Father thanked the bishops and priests for having remained close to their people despite the last decades of suffering and trials. He encouraged them to persevere in this commitment, “in order to ensure that the Catholic community in Iraq, although small as a mustard seed (cf. Mt 13: 31-32), continues to enrich the country's journey as a whole.” Words that take on even more value if one remembers where they were pronounced: the Syrian-Catholic Cathedral of "Our Lady of Salvation", where, in 2010, 48 faithful died in an attack.

The following day, having reached the Plain of Ur, the land of Abraham - recognized as "father" by the three monotheistic religions - the Pontiff sent a message of unity and spirituality, but also of concreteness. In fact, he summed up his message in the motto: "Let us look at the sky and walk the earth". This is why he underlined that in today's world, "which often forgets the Most High or offers a distorted image of Him, believers are called to bear witness to His goodness, to show His paternity through our fraternity", and he recalled at the same time that "God is merciful and that the most blasphemous offense is to profane His name by hating our brothers and sisters."

In Mosul, the Pontiff read the prayer of suffrage for the victims of the war, and also begged God that "those who caused such harm to their brothers and sisters repent, touched by the power of your mercy".

In Qaraqosh, welcomed by a cheering crowd, he heartened Christians with words of faith: “Now is the time to rebuild and start over, relying totally on the grace of God, who guides the fate of every man and of all peoples. You are not alone. The whole Church is close to you, with prayer and concrete charity.”

Finally, in the Erbil stadium, the Pope presided over the Eucharistic liturgy in front of ten thousand faithful. Recalling the many wounds that have marked the whole country, in general, and the Christian community in particular, he again indicated the way to follow: “Jesus shows us the way of God, the one He walked and on which He calls us to follow Him … He sends us, not to proselytize, but as His missionary disciples, men and women called to testify that the Gospel has the power to change lives.”