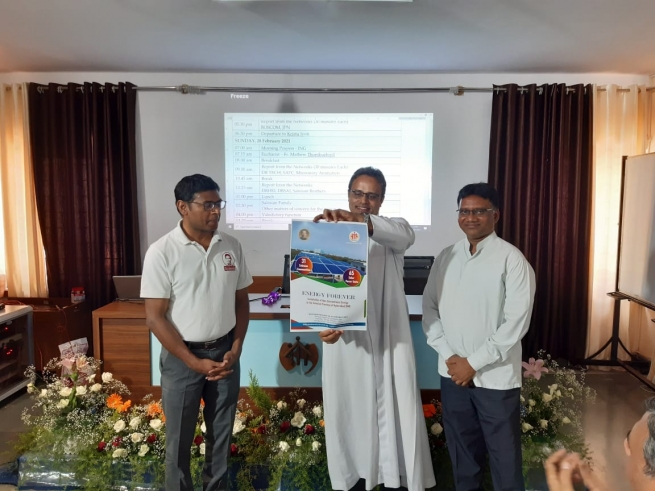 Fr Biju Michael congratulated the provincial Fr Thathireddy Vijaya Bhaskar and the confreres of the province for this innovative and futuristic venture. He commended, ''the Salesian Province of Hyderabad having anticipated the dream of the Rector Major, Rev Fr Angel Fernandez Artime, of Energy Forever (2032) by 12 years.''

One of the points of the Final Declaration of the "Energy Forever" Conference, promoted by the Sector for the Missions and by the General Economer of the Salesian Congregation (Rome, 26-27 November 2019), in fact invited "all the Provinces of the Congregation to conform to a sustainable development model leading to the full use of renewable energy sources by 2032. We ask for a commitment from the Congregation not to invest in fossil fuels.”

In response to the global call of Pope Francis through Laudato Sì, and the call of the Salesian congregation through General Chapter 28, crystallized in the 8th Priority of the Rector Major, ''accompanying the young towards a sustainable future,'' the province leadership has decided together with all the communities of the province to realize the dream of installing Solar Power Units in all the communities of the province, thus contributing to the significant reduction of carbon footprint and move towards sustainability.

The province has thus completed the process of adopting the renewable energy on 31 January 2021 in all its 31 communities with 65 Solar Units. This initiative will reduce 26,400 tons of CO2 produced to generate same amount of fossil fuel energy and spare 1,58,400 trees in treating CO2 emissions per annum. Fr Androth Jose, the economer of the province, and Fr Sudhakar Bellamkonda, the PDO of the province, have followed up the implementation of this initiative of the province.