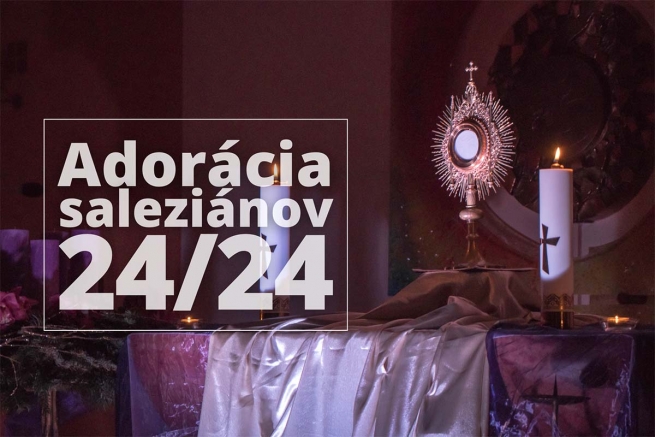 (ANS - Bratislava) - To act in unity for the Slovak people to counter the current situation: with this intention, on Monday 8 March, the Salesians of the Slovak Province (SLK) began a period of continued ongoing prayer called: "Adoration of the Salesians 24/24".

“We have recently received a lot of phone calls, messages and information from people suffering from Covid-19, along with requests for prayer for those who'd had victims or for those who had loved ones in serious conditions. We know that in Slovakia we are really ill with this disease,” the Vicar of the SLK Province, Fr Peter Jacko, wrote to his Salesian confreres; he then invited them to “do something for these people, united, together as Salesians in Slovakia.”

Currently, various Salesians work directly on the front line as volunteers in hospitals, and many centers organize various forms of prayer and help. However, now the Salesians, by virtue of their being consecrated, are led to unity in an initiative of community Eucharistic adoration. “We want to show and truly live unity, at the level of the houses of our Province, throughout Slovakia, and also abroad. And not just to show it to others, but to be truly united,” added Fr Jacko.

The "Adoration of the Salesians 24/24", which began at midnight on Monday 8 March, will end at midnight on Wednesday 31 March. During these 24 days, for 24 hours, the Salesians, in their 24 communities, want to “stand before the Lord in persistent adoration and pray for all the sick, the dying and for those who have already lost a loved one,” explains the provincial Vicar.

Since it is a 24-hour adoration, the Salesians also undergo the effort of night prayer. The recurrences of the numbers are significant: 24 for the Salesian Family is a strong reference to Mary Help of Christians, who is commemorated every 24th of the month. At the same time, on the last day of the month, the Salesians commemorate their founder, Don Bosco. And the last day of adoration, Wednesday 31 March, will also be the end of the Lent period, since the next day will be Holy Thursday.

Fr Jacko continues: “I'm convinced that in these times we really need to ask the good Lord, with one voice, to put an end to this pandemic, but we must also take the place of all the people who cannot come to church now. (in Slovakia, according to the anti-Covid-19 measures, it is not possible to attend Mass in person, Ed.), as well as for all the sick, the dying and for families who have lost their loved ones.”

Individual communities in Slovakia will share a total of 576 hours of prayer; they are joined by the confreres in the Slovak community of Aldan and Yakutsk, in Russia; in Baku in Azerbaijan; and also the Slovak Salesian students in Turin and Rome.

The Salesians also invite the other religious communities in Slovakia, the members of the Salesian Family and all the faithful to join spiritually in this marathon of Eucharistic Adoration.