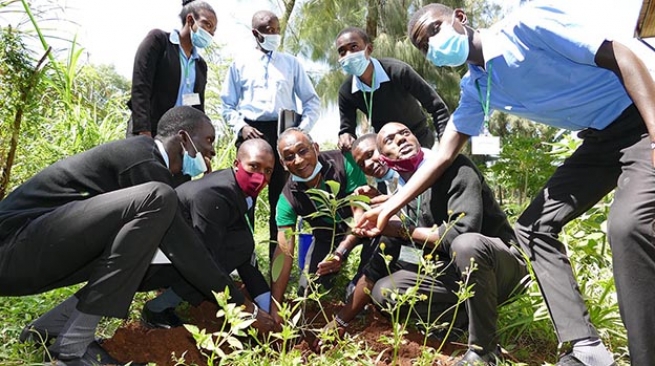 (ANS – Nairobi) – “Africa Environment Day” was established by the Organization of African Unity in 2002 as a way of raising awareness of the pressing environmental challenges facing the continent. Since 2012, the Africa Environment Day has been celebrated in conjunction with Wangari Maathai Day on 3rd March, as a tribute to the late Nobel Laureate's green legacy. The theme for this year’s commemoration was " Reimagining the Future: Clean and Green Cities for All. Build Back Better!"

On Wednesday 3rd March 2021, members of Don Bosco TVET Green Clubs from various countries in Sub-Saharan Africa joined the rest of the continent in commemorating this year’s event under the domesticated theme “Planting for the Future.” The major focus during this year’s event was tree planting. In total, 2992 indigenous and fruit trees were planted in 14 Don Bosco TVET Centres in five countries; Angola, Burundi, Kenya, Madagascar and Nigeria. Moreover, 1582 participants took part in the event. Over 2.43 tons of wastes was also collected in the centres that took part in the clean-up drive.

Don Bosco Tech Africa (DBTA) Executive Director Fr. George Tharaniyil graced the event, underscoring the importance of protecting our common home for generations to come. While addressing participants, Fr. George TJ expressed his gratitude to the young people who have already embraced the idea of championing for environmental conservation through the Don Bosco Green Clubs.

Inspired by the words of Prof. Wangari Maathai, "When we plant trees, we plant the seeds of peace and seeds of hope”, members of the Green Clubs engaged in a series of activities including tree planting and replanting, weeding of trees, drainage and garbage collection.

The team also visited Karen Police Station where they planted trees, followed by a cleanup drive in the Karen shopping centre.

Concurrent clean-up and tree planting activities were also held at Don Bosco Technical Institute - Embu and Don Bosco Technical Institute - Kakuma, where members of the Green Clubs from the two centres recommitted to protect, restore and stand up for nature. A total of 1760 indigenous and fruit trees were planted and 2.01 tons of wastes were collected in the three centres in Kenya.

In Burundi, members of the Green Club at Don Bosco Vocational Training Center in Buterere led by the Green facilitator, Mr. Guillaume Gahungu, also held environmental awareness talks and tree planting drive. The club planted 350 indigenous and fruit trees which were obtained from the already established tree nursery. Mr. Gahungu pointed out the significance of the tree nursery which will sustain future tree planting initiatives.

Members of the Green Club at John Bosco Institute of Technology Obosi in Nigeria were led by the Green facilitator, Mr. Sylvester Ibekwe, in marking the day by planting 14 trees due to space limitation, and held environmental talks to sensitize participants on the importance of preserving the environment.

In Madagascar, the celebration was coordinated by the Green specialist, Ms. Razafimizanilala Andréa, and four Green facilitators in the four Don Bosco TVET centres: Centre de Formation au Travail de Don Bosco - Fianarantsoa, Centre de Formation Professionnelle Don Bosco Antanimasaja - Mahajanga, Centre de Formation Professionnelle Don Bosco Tuléar and Centre de Notre Dame de Claivaux - Antananarivo. Members of the Green Club at Centre de Notre Dame de Claivaux in Antananarivo, Madagascar carried out a reforestation of indigenous plants and fruit trees at the centre. This was followed by a review and maintenance of the species that were planted last year, and cleaning of all the green spaces at the centre. The other three Don Bosco TVET centres celebrated the day by planting indigenous as well as fruit trees.  A total of 635 indigenous and fruit trees were planted and 0.42 tons of wastes were collected in the four centres in Madagascar.