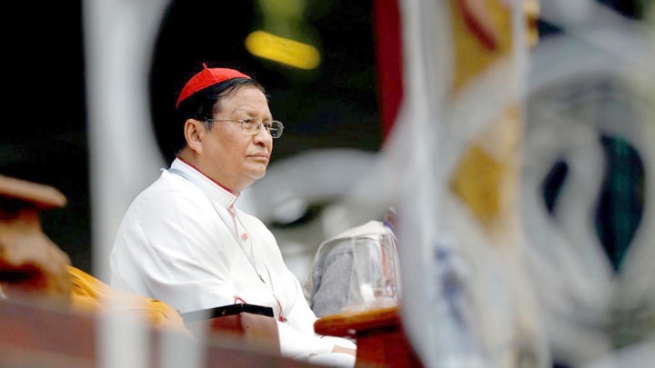 (ANS - Yangon) - “As the leaders of the Myanmar Catholic Church... we urge all parties in Myanmar to seek peace…. In recent weeks we have faced great challenges as a nation. This crisis will not be resolved by bloodshed. Seek peace!” Thus opens the letter sent to all the dioceses of the nation and to political, religious and civil society leaders by Cardinal Charles Maung Bo, Salesian, archbishop of Yangon and President of the Bishops' Conference of Myanmar, on behalf of all the bishops of the country.

The message of the Salesian cardinal, who is also President of the Federation of Catholic Bishops' Conferences of Asia (FABC), continues heartfelt: “The killings must stop immediately. There are so many deaths. The blood spilled is not the blood of an enemy. It is the blood of our own sisters and brothers, our own citizens. We are a nation that has cherished a dream. Our young people lived in hope. Let's not become a nation of senseless disappointment. Stop killing. Stop the violence. Leave the path of atrocities. Let all the innocent be released. They are our people.”

"The Cardinal asked that the Church of Myanmar transmit the Pope's concern and love for this nation." And keeping in mind the sentiments of the Pope, Cardinal Parolin, Cardinal Bo states, “he encourages the leaders of the Church of Myanmar to meet with the Superior General Min Aung Hlaing, the leader Daw Aung San Suu Kyi, other leaders of civil and religious society, and those involved in civil protests” to seek a way of peace.

“Peace is possible; peace is the only way. The Vatican Secretary of State, Cardinal Pietro Parolin, asks the entire Catholic community in Myanmar not to spare their efforts in this direction,” concludes the Salesian Cardinal.

The letter from the archbishop of Yangon, released on Sunday 14 March, was followed the following day by a video message the cardinal himself released on the occasion of the Day of Prayer for Myanmar launched by the NGO "Christian Solidarity Worldwide". On this other occasion, the prelate described "with deep sorrow" the situation of the country which "suddenly returned to the nightmare of military repression, brutality, violence and dictatorship".

And conversely, he praised "the incredible courage, commitment and creativity of our people", which he manifested peacefully, giving "a sign of maturity": "Young people and all citizens ... do not accept that hope is stolen from them. Their strength of mind is a great inspiration for all of us."