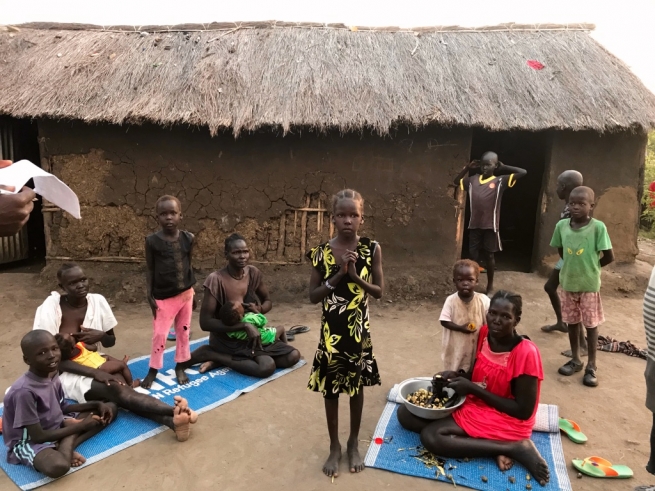 (ANS – Palabek) – Palabek Refugee Resettlement Camp is currently home to more than 56,000 refugees and asylum seekers. It was officially set up in April 2016 to reduce congestion in larger refugee camps in the northwestern corner of Uganda. Several agencies are involved in providing food and education within Palabek. While some have left because of the pandemic, Salesians have remained. And they provided food aid, supplies and 300 blankets to people with disabilities thanks to funding sent in November 2020 from Salesian Missions, the U.S. development arm of the Salesians of Don Bosco.

Even before COVID-19, living conditions in Palabek were not easy. Food distribution was scarce and there were difficulties in accessing drinking water. With the arrival of the pandemic, everything has become even more complicated. The amount of food delivered to refugees once a month has been reduced by 30 percent, classes and activities were suspended, and episodes of violence, alcoholism, and teenage pregnancies began. The UN Refugee Agency (UNHCR) warns that unless urgent action is taken to address the situation, levels of acute malnutrition, stunting and anemia are expected to rise, especially among children.

With Salesian Missions funding, Salesians have been able to provide food, 300 blankets for those with disabilities, cookware and other items for people in need. The funding also paid for transportation costs from Kampala to Palabek, gas for transport vehicles around the camp and motorbike repairs. Other funding provided incentives to social workers who are working in the camp under difficult circumstances.

“With Salesian Missions support we have been able to provide food and other necessities for people in need, particularly those with disabilities,” said Father Ubaldino Andrade, a Salesian Venezuelan missionary working at Palabek. “This donation is greatly appreciated because there is hunger and malnutrition and other nutritional deficiencies among the refugees. This creates much frustration, anger and other social disturbances. With this donation and others, Salesians have distributed many tons of food and clothing, especially to the poorest.”

In addition, students at Don Bosco Vocational Training Center in Palabek were happy to receive a bus thanks to donors from Salesian Missions of Madrid, Spain. These youth are now able to explore initiatives and new opportunities away from the settlement.

Salesian missionaries at the settlement are offering much needed psychosocial support and pastoral care for thousands of Christian residents. They also operate four nursery schools that educate more than 1,000 children. In addition, there are over 700 children attending Salesian primary and secondary schools, and more than 700 families are supported by other initiatives. Salesian missionaries also launched a vocational training centre to offer life skills and other training to help young refugees prepare for employment.