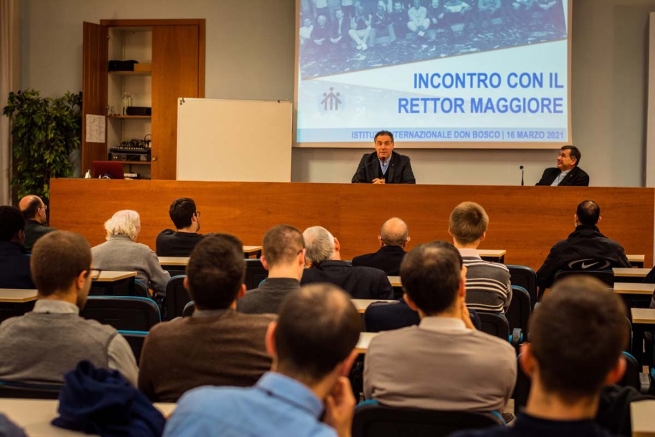 (ANS - Turin) - On Tuesday afternoon, March 16, the Rector Major, Fr Ángel Fernández Artime, visited the Don Bosco International Institute of Turin-Crocetta's formation community. The invitation addressed by the Director of the Community, Fr Marek Chrzan, to the Rector Major to visit the community of specific formation for the priesthood was aimed at offering him a better knowledge of this formation house in view of the rethink as regards Formation of the Congregation in Europe.

Fr Á.F. Artime, accompanied by Fr Francisco Santos Montero, member of the Formation Sector and in charge of formation houses in Europe, first met with the Director of the community, Fr Chrzan, with his Vicar, Fr Andrea Bozzolo, and with the Dean of the Faculty of Theology, Fr Cristian Besso; then he participated in the meeting of the formation team and the House Council; later, he met with the whole community.

After a fraternal greeting and the prayer of Vespers, the Rector Major shared the programmatic guidelines of the six-year term, and finally, he spoke with the community, answering questions and giving clarifications on this stage of formation.

The last point of the day was a moment of fraternal agape.

If on the one hand the visit achieved its purpose of allowing Fr Á.F. Artime to get to know the formation community in depth, on the other hand, it also served the young students of the center to feel the paternal closeness of the Successor of Don Bosco to their lives and to the formative concern of the young Salesians.