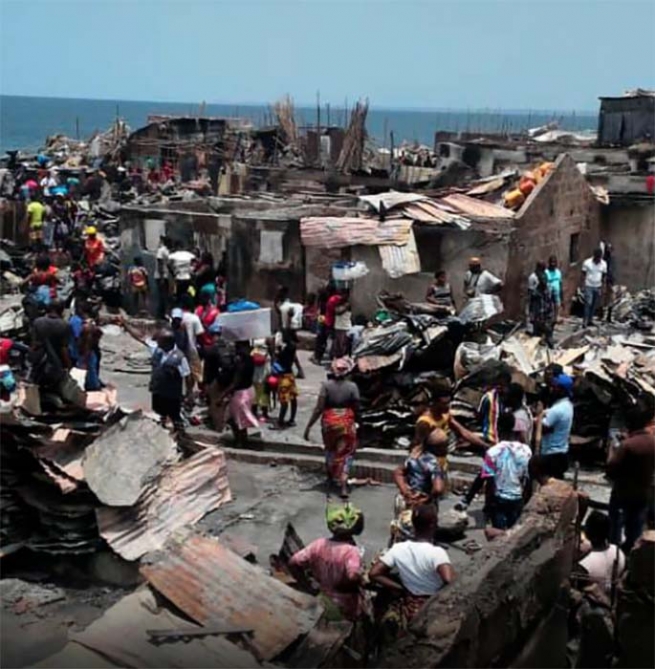 (ANS - Freetown) - The capital of Sierra Leone is once again the scene of a tragedy of immense proportions: a vast fire that broke out on Wednesday night in the suburb of Susan Bay, near the bay of Freetown, destroyed more than 10 hectares of land covered with shacks and huts in wood and sheet metal. Over 500 of these houses are reduced to ashes and more than 5,000 people have lost everything, including more than 600 minors, boys and girls, beneficiaries of the socio-educational programs of the Salesian "Don Bosco Fambul". The Salesians have already announced that their doors are open to welcome, help and protect, especially children, adolescents and mothers with small children.

“We have lost everything. We got out as fast as possible as soon as we heard the shouts 'Fire, fire!' We were on the street, without food since that day and without knowing where to go, because I am taking care of my grandmother who is very old,” says Yaikain, one of the girls hosted at “Don Bosco Fambul” and who, like hundreds of children, urgently needs help.

In just four hours, and for reasons still unknown, the fire spread through the wood and cardboard that shaped most of the humble houses. Apparently there are no victims, but there are about 80 injured and more than 5,000 displaced.

“Children, adolescents and mothers with babies know they have a safe place to go to at 'Don Bosco Fambul',” says the Spanish Salesian missionary Fr Jorge Crisafulli.

The Salesians have already acted in this way in other similar tragedies, opening their doors and offering all possible help to the most needy population.

They did so during the Ebola epidemic in 2015, welcoming orphaned minors; in December 2016, when another fire in the Angola Town suburb left hundreds of people homeless; they did it again in August 2017, when the Salesian courtyards became the new home for dozens of people for several months, when a landslide on the "Sugar Loaf" hill caused over 1,000 deaths and hundreds of injuries and displaced persons; and, finally, they did so during the confinement for the Covid-19 pandemic, hosting dozens of children.

“Many children we had rescued from the streets and reinstated with their families lived there. Many minors from the anti-violence program, saved from prostitution, also survived crammed into these humble shacks. More than 600 boys and girls we serve in our programs have lost everything in the Susan Bay fire, so we urgently need help to cover their basic needs,” adds Fr Crisafulli.

The Salesians, who are collaborating with the government, the mayor's office and other NGOs active in Freetown, are clear. “We will help those who have lost everything by giving them shelter, clothes, hygiene products, food and medicine, so we will in turn need urgent help for hundreds of minors,” concludes the Salesian missionary.