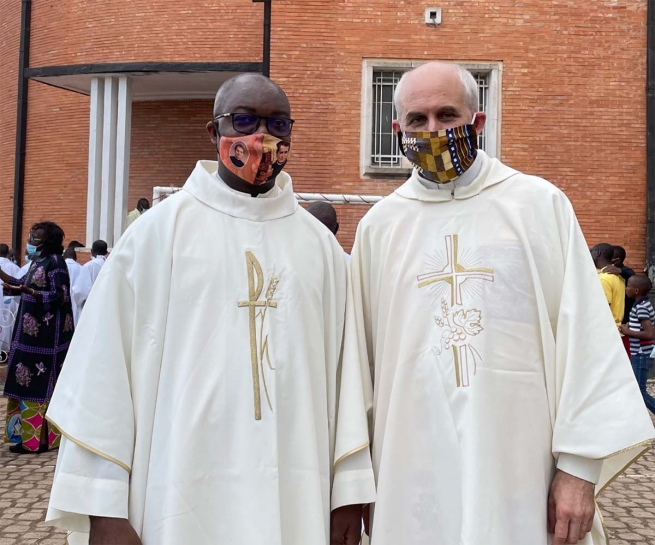 (ANS - Lubumbashi) - On 3 March the "Assumption of Mary" Province of Central Africa (AFC) had the joy of receiving the announcement of the appointment of its new Provincial, Fr Guillermo Basañes; the following day it was able to learn about the entire new Provincial Council, in which the Rector Major, welcoming the discernment carried out in the last two AFC Provincial Chapters, has now appointed a Delegate for the Provincial Delegation of the East, which includes the communities of Goma, Bukavu and Uvira. Finally, on Friday 19 March, on the Solemnity of Saint Joseph, joy reached its climax with the inauguration ceremony of Fr Basañes.

Representatives of the various branches of the Salesian Family, as well as several Salesians and novices, took part in the celebration held in the "Regina Mundi" Chapel of the "Imara" Salesian Institute in Lubumbashi. The Mass was presided over by the Regional Councilor of Africa-Madagascar, Fr Alphonse Owoudou, and also saw the presence of Msgr. Gaston Ruvezi, Salesian, bishop of Sakania-Kipushi, and Fr Manolo Jiménez, Superior of the Vice Province of Africa Congo Congo (ACC), who came to take part, the following day, in the Curatorium of the Theological Studentate “St John Bosco” Institute in Kansebula, but also for a fraternal visit to the Salesians in his jurisdiction.

During the celebration, the new Provincial entrusted the entire 6-year term to Saint Joseph, this on the day of his liturgical memorial and in the special year that the Holy Father has dedicated to him.

After the Mass, a moment of fraternal sharing followed in the courtyard of the institute. Everything took place in simplicity and in Salesian joy.