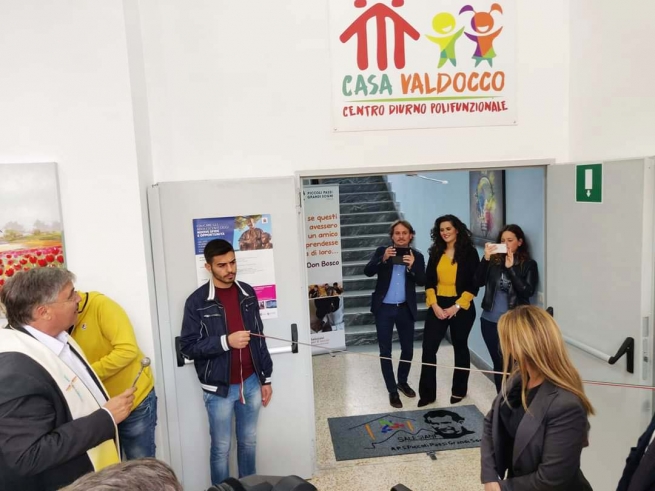 (ANS - Torre Annunziata) - The Salesian presence in Torre Annunziata, a town on the outskirts of Naples, represents an educational oasis in an area full of challenges, significantly increased and aggravated, moreover, by the pandemic. For this reason, the reopening of the Salesian Day Center "Casa Valdocco", animated by the Salesians and their lay collaborators, after almost two months of closure due to the Covid-19 emergency, is a ray of hope for those children who most need a friendly presence at their side.

The minors who attend the day center are sent there by the social services of Area N.30 (Municipalities of Torre Annunziata, Boscoreale, Boscotrecase, Trecase) upon notification by the schools and by the Social Service of the Juvenile Justice Center for restorative justice paths.

They are young people who already have difficult contexts behind them and who have spent the last few months experiencing further difficulties. "They remained closed in their homes, where often, in a single room, attempts were made to follow Distance Learning (DAD), sharing the same mobile phone between several brothers, unable to have a confrontation with peers and educators," explains Fr Antonio Carbone, Director of the Salesian house in Torre Annunziata.

In this year of DAD, the Salesians and their lay collaborators at Casa Valdocco have put in place many strategies to reduce the growing school evasion. And now that the center can finally restart, they have provided for a reshaping of the activities and educational interventions aimed at the many young people followed by the operators of the Center.

It starts at 8.30 to encourage those who are unable for various reasons to participate in the DAD, and continues in the afternoon with the study space and workshops.

The innovative aspect of the new phase of this service is the creation of an educating community in which the outdoor educational experience is favored, further to the traditional indoor one: a perspective of leaving the physical space of the Day Center in favor of an educational strategy in which to bring together the social, cultural, sporting and voluntary experiences of the territorial network.

The approximately 40 beneficiaries are involved, for example, in volunteer projects, as well as in urban redevelopment interventions. In this way, in addition to enjoying open spaces and receiving educational content, they also act in favor of the community.

The activities are the most varied and include workshops of legality, creative writing and artistic recycling, without forgetting the courses and workshops of pizza-making, boxing, pastry-making, cafeteria-service, sailing, volleyball, football, dance, rugby, small artistic works ...

All this, thanks to the planning, integrated services and collaborations developed by the non-profit organization "Piccoli Passi Grandi Sogni aps – Small steps, big dreams" belonging to the network of Salesians for Social APS.