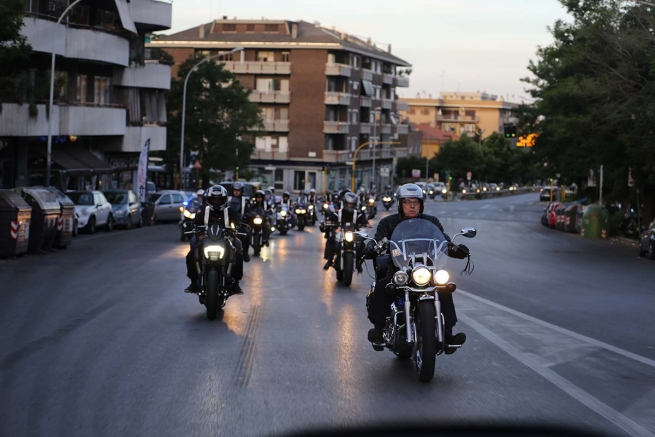 (ANS - Krakow) – On Wednesday, 22 June, 180 participants in the motorcyclists’ pilgrimage "Shining Light of Mercy" met Pope Francis at the general audience in St. Peter's Square. The pilgrimage is one of the preparatory events for the World Youth Day (WYD) 2016 in Krakow, and was organized by the Salesian Missionary Volunteer Group "Młodzi Światu" in Krakow, together with the Organizing Committee of World Youth Day. The idea came from a Salesian, Fr Adam Parszywka, Director of "Młodzi Światu" and the Department of Communications of the World Youth Day. He has just recently been appointed as the next Provincial of Krakow.

The pilgrims arrived at the audience on 130 motorbikes, escorted by police. They gave some gifts to the Pope: a copy of the motorcyclists' prayer that accompanied them all the way (it was recited daily by the pilgrims and by those who supported the initiative from home); a cross made from pieces of a motorcycle from the motorcyclists of Racibórz; a helmet painted with the face of the Merciful Christ - the Pope was impressed by its originality - and finally a white leather jacket with the logo of WYD 2016. Fr Parszywka assured the Pope that Krakow and Poland are waiting for him and the Holy Father said he appreciated the fact that the pilgrimage started from the Shrine of Divine Mercy.

After the audience the bikers attended the Eucharist at the nearby church of Santo Spirito in Sassia, a place of special devotion to the Divine Mercy. This was the crowning event of the entire pilgrimage, which included prayers, nights spent in the woods, 1600 km in the saddle, and meetings with Parish Priests in many different situations.

In the evening, at the Salesian Generalate, the pilgrims were greeted by Fr Tadeusz Rozmus, General Councillor for Central and Northern Europe. He thanked them for their witness of faith and for raising questions and emotions in an increasingly secularized Europe.

The bikers’ pilgrimage was sponsored by the Organizing Committee of World Youth Day, the Archbishop of Krakow, Cardinal Stanisław Dziwisz and Malopolska.

"Although the motorcycle pilgrimage has ended, our mission to bring Mercy to Europe and the world has just begun!" the pilgrims said.