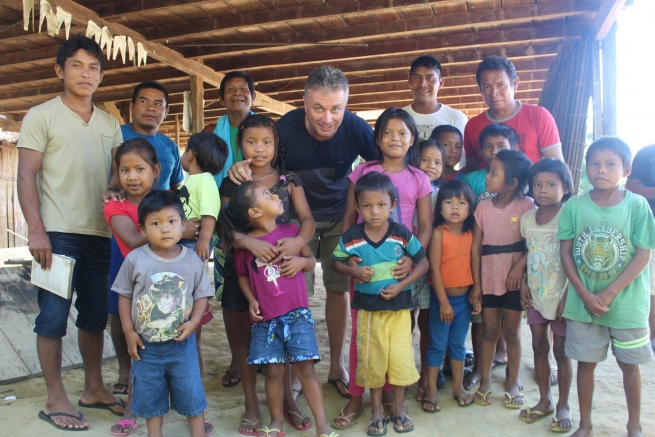 (ANS - Iauaretê) - How is Easter lived and experienced in the missions? Salesians tell us how one prepares for the most important days of the year in the poorest lands in the world. In particular, Fr Roberto Cappelletti, a missionary in the Amazon, in Iauaretê, at the extreme western border of Brazil, right in front of the border with Colombia, wanted to share the solemn moment of the Easter Vigil in his mission.

The Easter Vigil in Iauaretê is extremely evocative and special. Iauaretê is a missionary district with 10 villages around the Salesian house and each village is consecrated to a Salesian Saint.

As Fr Cappelletti explains: “On the night of the Vigil, each village lights a large fire in the central and community part. Simultaneously communicating the beginning with the sound of the bells of the main church, the inhabitants of each village light their candle at the central fire and walk towards the parish. The inhabitants of the ten villages,” he continues, “arriving in front of the parish church, form a large circle in front of the pile of wood prepared by the liturgy team. Each village also brings with it the new Easter candle. During the song, everyone, each with their own candle, sets fire to the large pile of wood from which, during the liturgy, the 10 candles of the villages and the paschal candle of the main church will be lit. It is a time of great spirituality and very emotional. Children, adults and the elderly, as a sign of faith in the Risen Christ, bring their small contribution of light, as witnesses of the Resurrection. In 2017, I celebrated 37 baptisms during the Easter Vigil. Let's say that the celebration lasted a little longer than expected (3 hours), but it was really beautiful,” added the missionary.

Fr Cappelletti also wanted to share an anecdote, dating back to a few years ago, when he celebrated the Easter Vigil in the village of the Hupda ethnic group, Santa Cruz do Cabarí.

“In 2018 I celebrated the Easter Vigil in the village of the Hupda ethnic group, Santa Cruz do Cabarí. On Holy Thursday all the inhabitants of the other Hupda villages of the Japú river arrived. There were about 700 people. I spent Thursday night, all Friday, and all Saturday confessing these people; 95% confessed in their own language, which I did not know,” he explained. “I entrusted everything to the Mercy of God, who knows all and forgives all. I had brought a traditional Easter candle, but to my surprise they, amazing beekeepers, had made a huge one out of beeswax. I was moved. Due to its size, they transported it to the center of 'Our Church under the Stars' with a wooden cart. On that night, 85 baptisms were celebrated between children and adults. The most beautiful Easter Vigil I've ever experienced.”