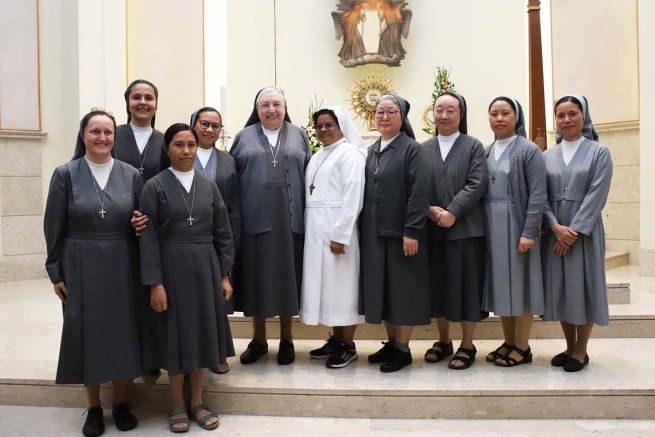 (ANS – Rome) – On 4 April  2021, at the end of Vespers of the Solemnity of Easter, the Mother General of the Daughters of Mary Help of Christians, Sr. Yvonne Reungoat, communicated to the Generalate Community the destination of the eight new FMA missionaries.

The new missionaries, from seven Provinces and three Continents, learned of their destination at the end of a time of discernment, prayer, and dialogue lived from 15 to 26 March 2021, with the accompaniment of the Councillor for the Missions, Sister Alaíde Deretti.

Sr. Alaíde Deretti, Councillor for the Missions, thanking each new missionary and their provinces of origin for their generous ‘yes’, took up the words of Pope Francis: ” ‘outgoing Church’… is the command of Jesus, who in Mark’s Gospel asks His followers to go all over the world and preach the Gospel ‘to every creature’. The Church is either outgoing or it is not the Church. Either it is in proclamation or it is not the Church. If the Church does not go out, it is corrupted, it is distorted. It becomes something else” (From the interview with Gianni Valente – Extraordinary Missionary October, 2019).

The Councillor wished them “to allow themselves to be led by faith and hope in this particular time when the world needs health, safety, and courageous heralds of the Gospel”.

The new missionaries will continue their formation journey in preparation for the mission ad gentes, intensifying the study of the language of the Founders, attending courses at the Pontifical Urbanianum University of Rome, participating in moments of encounter with the different Sectors, and sharing the experience of life in the international and multicultural community of the FMA Generalate.

The destinations of the new-missionaries:

Mother communicated the destination of Sr. Hwang Hye Soon Giuseppina, from Morning Star Province (KOR), formerly a missionary in China. Sister Giuseppina, after having participated in the discernment process together with the new missionaries, was assigned to Queen of Peace Preprovince (ANG) – Angola.