Myanmar – The country today: a report from a Burmese citizen 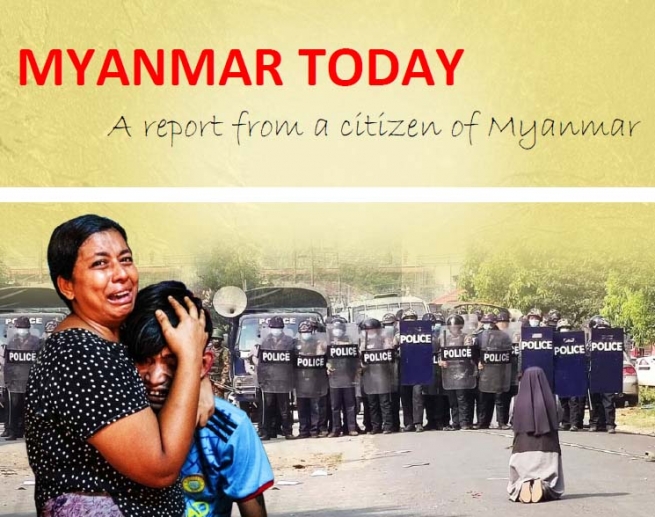 (ANS - Yangon) - In view of the prayer initiative promoted by the Salesian Youth Movement of the Youth Ministry Department of the Salesian Congregation in favor of Myanmar (Sunday 11 April, Myanmar 15:00), a Burmese citizen wanted to share with ANS a report on the current situation in the country.

On 1st February 2021, the military of Myanmar staged a coup, arresting the President, the State Councillor and many other members of the government and civilians. It was the end of 5 years of an experiment in democracy in the country under the leadership of Daw Aung San Suu Kyi. Myanmar has been under military dictatorship since 1962 with different names of the government. Only in 2015 was a democratically elected government installed.

This time, instead, things are quite different. The people of Myanmar, especially the young did not bow to the junta. Tens of thousands of them protested daily in all parts of Myanmar. Civil Disobedient Movement (CDM) did a great impact to the junta that the military is not able to run the government until now. The Committee Representing Pyidaungsu Hluttaw (CRPH), which is made up of elected law-makers of the General Election of November 2020, is working hard in the field of diplomacy to reach out to the  international community and their work impose much pressure on the junta.

After more than two months of the coup, the Young People, who call themselves Generation Z, keep demonstrating in so many places of the country. The military has no other way but to use violent means – shoot and arrest – to suppress the protests. So far, they have shot and killed about 600 people and many are wounded; 2751 people have been detained and most of them do not even know the reason of their arrest. The junta continues to shoot and kill. The worst action is night raids, in which the soldiers and police go around in the residential areas shooting recklessly; they break into houses in the middle of the night and shoot, beat and arrest people arbitrarily; they take away their money and valuable things in the house. The people have nowhere to turn to for security and justice.

Most of the young people feel the need to take up arms for self-defense. They have formed Civil Defense Force (CDF) to protect the people. However, the people have no ammunition that can compete against the fully-armed soldiers. Many expected that the international community would intervene to stop the killing of unarmed people. The situation is as such that the people of Myanmar will have to be their own masters and fight back as much as they can. If things go on like this, a bloodbath is unavoidable in Myanmar. As usual, the young are the ones that suffer in all the social transformation.

So, dear friends, please pray for Myanmar earnestly and please know that your solidarity is our strength to go through this difficult crisis.