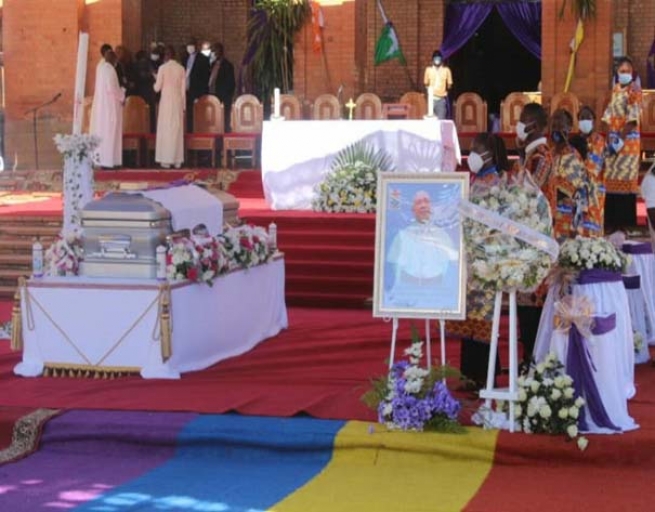 (ANS - Lubumbashi) - The Catholic faithful of Lubumbashi, in the Province of Upper Katanga, in the Democratic Republic of Congo, have lost their pastor, fully active until then, following an illness: Msgr. Jean Pierre Tafunga Mbayo, a Salesian of Don Bosco, in fact, passed away on March 31, 2021, and in recent days has received several and dutiful tributes to his memory for the work done in his diocese and throughout the country.

The remains of the metropolitan archbishop arrived from South Africa in the capital of Upper Katanga on Wednesday 7 April, and were received by the religious, political and administrative authorities and then taken to the "Saints Peter and Paul" cathedral in Lubumbashi. Meanwhile, the diocesan Church had already announced five days of  mourning in his memory from Monday 5 April to Friday 9 April, which took place amid Masses and vigils in the cathedral.

On Friday 9 April, the day of the funeral, many people came from all over the country to give the last farewell to Msgr Tafunga. After the Mass, presided over by Msgr. Marcel Utembi, President of the National Episcopal Conference of Congo (CENCO), some moving words of remembrance and farewell to the life and work of the Salesian prelate were read. Finally, the body of the archbishop was buried in the crypt of the cathedral.

Born in Panda-Likasi, Democratic Republic of Congo, on 23 July 1942, Msgr. Tagunfa had joined the Salesians in 1964, attending the novitiate in Kansebula. He made his first vows on 28 August 1965 and his perpetual vows on 20 February 1971 in Lubumbashi. He was ordained a priest on 16 September 1972 in Likasi.

He was Director of the Salesian house in Goma, in North Kivu, from 1981 to 1987, and Director of the Salesian center in Kansebula from 1987 to 1990. In that year, he was then installed as Provincial Superior of the "Assumption of Mary" Province of Central Africa, becoming the first African to take up this post. However, he was unable to complete his six-year term because in October 1992 Pope John Paul II appointed him bishop of Kilwa-Kasenga, receiving episcopal ordination on the subsequent Feast Day of Don Bosco, January 31, 1993.

On 10 June 2002, John Paul II again appointed him bishop of Uvira. On 31 July 2008, he was appointed coadjutor archbishop of Lubumbashi by Pope Benedict XVI, with the right of succession, becoming titular of the archdiocese on 1 December 2010 and assuming its pastoral guide on the following 30 January.

"Amor et misericordia" was his motto and the insignia of his pastoral action.