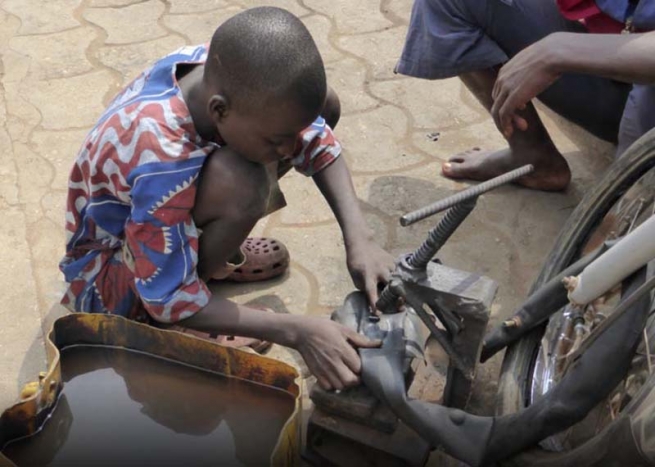 (ANS - Madrid) - They are an economic and submissive workforce, easily replaceable, requiring little food, no wages and who, not knowing their rights, do not protest: these are the children in conditions of slavery. More than 150 million children work around the world. Of these, nearly half, more than 73 million, are employed in dangerous jobs that put their lives at risk. At least 9 million children in the world are slaves in the 21st century, and today, April 16, is the International Day against Child Slavery. The Salesians want to break the chains that oppress and enslave them.

They are forced to work long hours with little rest. Most of them work in mines, agricultural estates or as domestic slaves. Others are involved in armed conflict, in the business of begging, or forced into early marriages. All are abused and many are victims of trafficking or sexual abuse. They do not go to school, they do not know their rights and they or their families have been victims of a scam.

On the International Day against Child Slavery, which is commemorated today, the Salesians intend to continue to give visibility to these children whom they are constantly trying to help in Africa, Asia and the Americas. The goal is clear: that in the 21st century there be a political and social commitment to end slavery.

Slavery has been officially abolished, but it still exists in the 21st century. It is present in at least nine million lives of children who work in domestic service, in the loading of goods in ports, in mines, in factories, in armed conflicts, in human trafficking, prostitution, in child marriages, in forced begging.

The consequences for the more than 150 million children in the world forced to work are many, but the main one is the loss of childhood and developmental difficulties. In the current moment of the pandemic, at least 9 million continue to be enslaved and exposed to infections without the necessary health security measures.

They live far from their families, without education or access to health care. They have lost their childhood and have no time to play and almost no time to rest. The Salesians work together with state and civil organizations to sensitize families and employers on the rights of minors. Through shelters to make children feel safe, they create a family environment, while seeking their families for the reintegration of minors whenever possible.

The most important tool for breaking the chains of child slavery is education. Children who know their rights and who have the opportunity to train, be educated and learn will be able to change their future without losing their childhood.