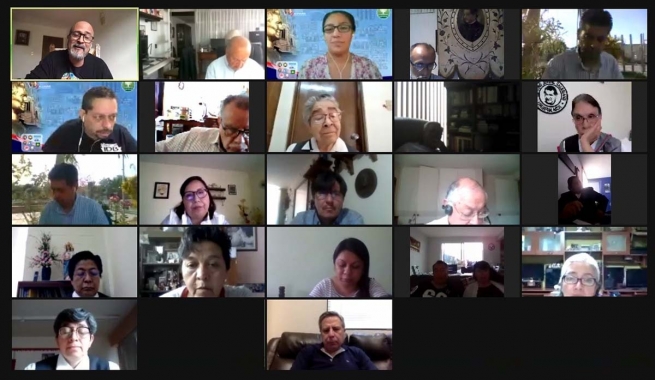 (ANS - Mexico City) - On 10 April – online - the Salesian Family of Mexico-South met the Regional Councilor for Interamerica, Fr Hugo Orozco Sánchez, as part of his Extraordinary Visit to the Salesian Province “Our Lady of Guadalupe” of Mexico-México (MEM). The meeting consisted of a space for fraternal dialogue, in which Fr Orozco answered questions put to him by the communication and formation team of the Past Pupils of Don Bosco in Southern Mexico and the Delegates of the Salesian Family in Southern Mexico (Provinces of the Daughters of Mary Help of Christians and of the Salesians).

At the beginning, Fr Orozco concentrated on the presentation of the figure of Fr Paolo Albera, indicating in detail the virtues, limits, achievements and challenges of the "Little Don Bosco" to whom the Congregation has dedicated this year.

Then he answered various questions posed by some of the meeting's participants – who also took part from Northern Mexico, Ecuador, Guatemala, Bolivia, El Salvador, Haiti, and Canada - and invited them to be capable of giving answers to everyone in the Church, even those who are far away, in the first place by bearing witness, patience and loving kindness, as Christ and Don Bosco would. And in the face of social, political and economic proposals contrary to the common good, he invited us to commit: the Past Pupils, for example, in politics, in support of political projects for the improvement of the country; members of other groups, in social work for the good of all, especially the young.

He also stressed that many times there are those who feel called to do good to young people, and that this impetus should be supported by small steps to bring them closer, with a smile, support, an empathetic attitude ... And he reminded everyone to be authentic, so that the charism inherited from Don Bosco and Father Albera may shine forth in their lives.

He asked the laity not to wait, nor to imitate in toto the religious, who - he remarked, "are still human beings, with limits and errors". Indeed, he made it clear that sometimes the example of the good laity also elevates the spirit of the Salesians. Furthermore, he urged them not to be afraid of the doubts and questions of today's young people, but on the contrary asked to accompany them inside the Salesian houses, on the foundations of the Gospel.

In addition to reiterating to avoid grumblings and gossip, in conclusion he stated that he saw a lot of work and a lot of hope in everything that is being done in the Provinces and in the works of Southern Mexico. And finally he addressed “an aside”: of praise for the efforts being made in each charismatic area, and of encouragement for those areas that should be considered in order to develop and grow better.

After the meeting, Fr ​​Orozco presided over the Vespers Mass of the Feast of Divine Mercy in the Parish-Shrine of Mary Help of Christians.