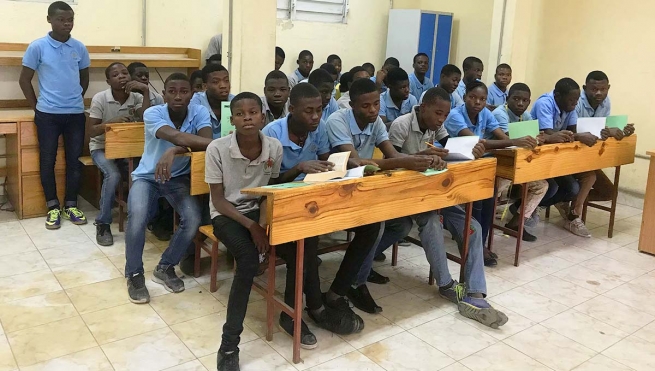 (ANS - Port-au-Prince) - The issue of street children and young people is nothing new for Haiti. Already in 1988, a Salesian house especially dedicated to them was started with a structured program to try to recover the most marginalized minors humanly and socially. Today that project is structured under the name of “Lakay Don Bosco” and foresees a path of redemption divided into 3 stages.

"La Rue" (street, in French) is the first step, the one that involves approaching and creating a relationship of trust between the Salesian or the social worker and the minor; the second step is "Lakou" (courtyard, in Creole), and consists of receiving the child in a first reception area and possibly entering a school or vocational pathway.

The third stage is called “Maison” (home, in French) and involves taking care of the minor for 2 or 3 years at the “Foyer Lakay” family home. During this period, the community works for his socio-family reintegration, directing him to an internal vocational school, also attended by young people who do not live at the facility, which offers courses for beauticians, electricians, cutting and sewing, refrigeration, carpentry.

The age and educational level of the beneficiaries differ from the normal schooling of other children, since it is often several years since their last attendance at school desks. For this reason, they often need a process of making up for school gaps, which provides them with the cultural tools useful for later receiving vocational training.

At the Salesian school "Father Artur Volèl", a specific program has been activated, approved by the Ministry of Education, for the recovery of school years that takes place over 4 years instead of 6.

The beneficiaries of the project are 54 young people and adolescents aged 14 and over, boys and girls, from the program of the "Lakay" project, but other young people are also involved who come from the neighborhoods adjacent to the school and who have never had access to studies or who abandoned them prematurely.

Thanks to the psychological support provided, many changes have been observed at the relational, moral and intellectual level in these children and young people, in a climate of solidarity, where the achievement of a personal goal becomes everyone's victory and an incentive to do one's best.

A fundamental role is being played by teachers, who during the pandemic had to face considerable sacrifices, such as staying in school for long periods without being able to meet their families. The attention and individual support offered by teachers to pupils - with personalized recovery programs, especially for the weakest children in basic subjects - have produced unexpected results.

Today the vast majority of students are motivated, attend school with enthusiasm and have understood the importance of the path they have taken. They are young people aware that they have received a second chance to improve their life and do not want to waste it.

Learn more about it at: www.missionidonbosco.org