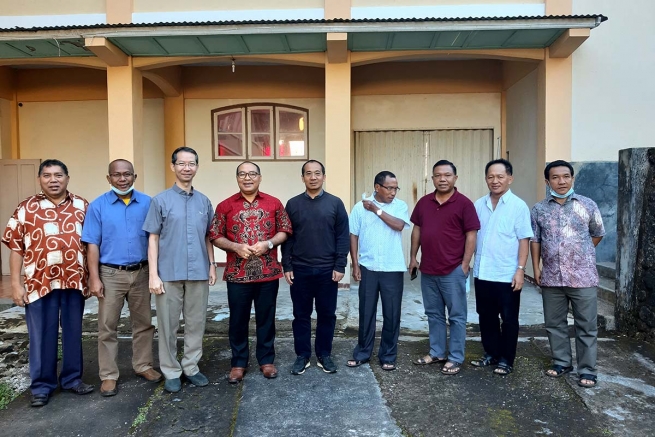 (ANS – Ruteng) – On Friday morning, 16 April 2021, Fr Yohanes Boedi Soerjonoto, Provincial Economer, and Fr Paulus Anggara Rarasta, Provincial Delegate for Youth Ministry, finished their five-day exploration in the Diocese of Ruteng. The area of the Diocese occupies the west part of Flores Island. The island itself is part of the East Nusa Tenggara province of Indonesia whose eastern part was hit by a cyclone and flash floods recently. The trip is a follow-up to the invitation of the Bishop, Mgr. Siprianus Hormat, for SDB Indonesia to open a work in the diocese.

They visited five potential locations offered for SDB and listened to the presentations and inputs from the Pastoral Center, Youth Ministry, and the clergy of the Diocese to discern together what kind of work and where is the place for the Salesians to start working in the Diocese, to answer the need of the local Church with the contribution of the Salesian charism and mission for the good of the young people in particular. The process ended with a personal meeting with the Bishop.

The Bishop, the clergy, and the local people are enthusiastic about the plan and they are looking forward for Salesians to come soon to start their service. This will be the first presence of SDB on the Flores Island whose population is predominantly Catholic.

The Salesian presence in Indonesia dates back to 1985, when the first missionary pioneers arrived there from the Philippines. Their sowing was fruitful and today there are 64 religious belonging to the "St Luigi Versiglia" Vice Province of Indonesia (INA), of which 11 temporarily in another Province (and among them several missionaries ad gentes).

Today, in the vast and varied Indonesian archipelago, the Sons of Don Bosco are present with seven houses scattered over only two islands: Blitar, Purwodadi, Surabaya, Tigasarka and the two centers in the capital of Jakarta-Sunter and Jakarta Wisma, all on the island of Java; and then the house of Sumba, on the island of the same name.

The INA Vice Province was erected in 2018 by detachment from the "St Callisto Caravario" Vice Province of Indonesia-East Timor (ITM), within which it was previously constituted as a Provincial Delegation.