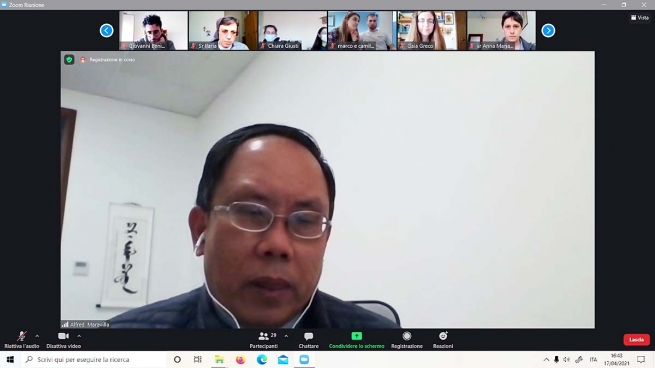 (ANS - Rome) - The cycle of meetings of "MissioLab" ended last Saturday afternoon, April 17, a path carried out entirely online, conceived by the Mission Animation of Central Italy during the pandemic to continue to train and raise awareness of young people interested in the theme of globalization and missions. The four monthly appointments, from January to April, sought to deepen the theme of the pandemic linked to youth and Salesian contexts in Italy, Europe, and the rest of the world. Among the guests who were invited to discuss the topic, the meeting on 17 April saw the precious participation of the General Councilors for the Missions of the Salesians and the Daughters of Mary Help of Christians.

Sister Alaíde Deretti spoke of some initiatives carried out with great commitment by boys and girls, during the pandemic, in various countries of the world, from Angola to Colombia, from the United States to the Philippines. Recovering environments to be used to support those in difficulty, paths of peace and social justice, distribution of meals to the poorest, are just some examples that demonstrate the will to do something, despite the difficulties and the possibility of living missionary experiences both ad gentes and inter gentes.

Fr Alfred Maravilla, for his part, left a vigorous message on the importance of knowing one's culture in depth, without fanaticism or judgment, because this is the only path that allows you to truly open up to the other. "Each of us participates in the virtues and sins of their people," he said, and this awareness must underscore that there is no culture better than others and that it is always possible to learn something from the encounter with the distant and the different.

The other intervention in the afternoon was the testimony of Agostino Sella, President of the "Don Bosco 2000" association, on the activities carried out by the organization, which did not stop even with Covid-19. Mr. Sella, together with his wife, runs an oratory in Sicily and since 2010 the two have dedicated themselves to welcoming migrants, then developing circular migration projects between Italy and the African continent, in particular Senegal and Gambia.

Finally, Fr Jean-Marie Karam, a Lebanese Salesian missionary from the ICC Province, spoke about how he is preparing for his next destination: Sudan. He said he was happy to have received this possibility and the joy for the experience that awaits him is greater than any fear. He has already experienced the war in Lebanon and he is not even worried about age (born in 1959): he just has a great desire to get involved and trusts the Lord, because he has always felt the deep desire in his heart to "touch the mud" and to put himself at the service of the most needy.