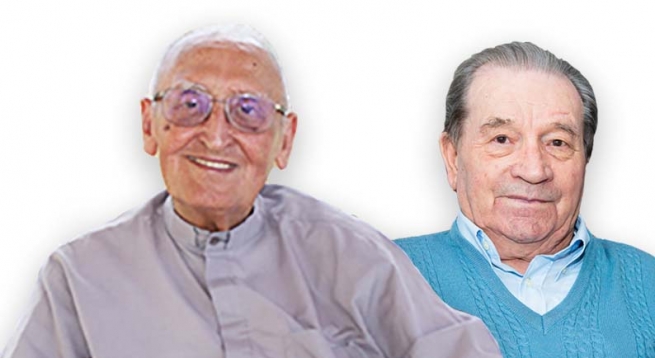 (ANS - Rome) - Yesterday, Thursday 22 April, two Salesians, known and appreciated across a large part of the vast Salesian Congregation, left their earthly life to begin their celestial one: Fr José Carbonell Llopis, 94, former Provincial in Spain and the Philippines; and Bro Cesare Borlengo, 86-year-old Salesian Brother, a humble and friendly Son of Don Bosco who both in Piedmont and at the Salesian Headquarters had always made his availability and service with a smile his signature traits.

Fr José Carbonell Llopis was born in Alcoy, Alicante, on March 27, 1927. He did his novitiate in Sant Vicenç del Horts, where he made his first vows on August 16, 1946. After studying Philosophy in Turin-Rebaudengo (1946-50) and completed his internship in Girona (1950-52), as an assistant to the post-novices, there he made his perpetual profession on 21 July 1951. He studied Theology in Turin-Crocetta and obtained a degree in Philosophy at the Salesian Pontifical Athenaeum and a licentiate in Theology. He was ordained a priest in the Basilica of Mary Help of Christians in Turin on 1 July 1956.

Fr Carbonell shall be remembered as a great Salesian, passionate, in love with the Congregation, enterprising, optimistic and cheerful.

Brother Cesare Borlengo was born in Vezza d’Alba, in the Cuneo area, Italy, on 15 November 1934. He entered among the Salesians in the novitiate of Chieri on 15 August 1951; he made his first profession on 16 August 1952 and his perpetual profession at Colle Don Bosco on July 21, 1958.

An active and zealous brother, he served the Salesian houses of the then Central Province, based in Turin, near Cumiana and Casalette. For 25 years he was a well-known and benevolent figure for all Salesians residing or in transit at the Salesian Headquarters, where, with his usual style imbued with Salesian loving-kindness, he tirelessly took care of the most disparate jobs, even in the face of advancing obstacles due to health problems and old age.