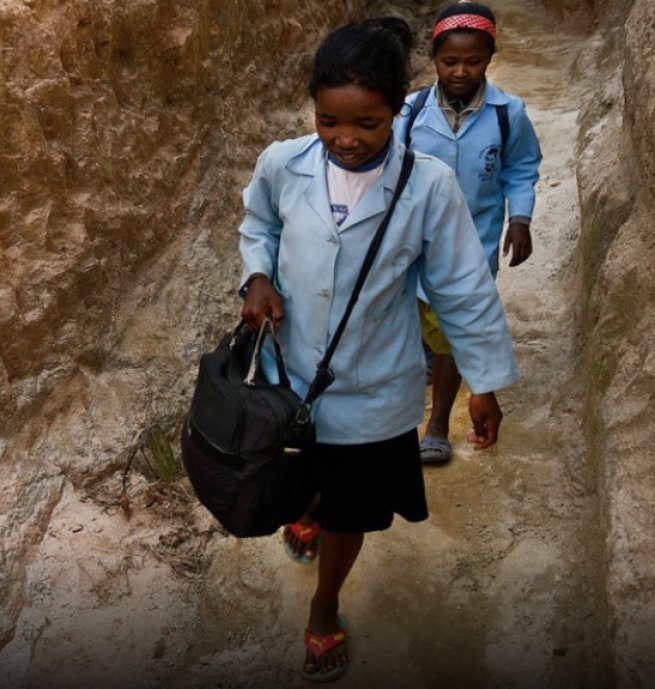 (ANS - Bilbao) – Inaugurated in Bilbao last Monday, April 26, was the photographic exhibition "Indestructible: a look at the generation of the future of Africa". It was organized by the Salesian NGO "Jóvenes y Desarrollo" and by "Misiones Salesianas" , the Salesian Mission Office of Madrid, which sponsors the initiative. The artists - the photographer Alfons Rodríguez and the journalist Xavier Aldekoa - were also present at the opening of the exhibition, who organized a guided tour of the exhibition.

Africa is the continent of the future. The youngest region on the planet, with an average age of 19, it is also a land of enormous contrasts. "Indestructible" brings viewers closer to the reality of Africa through the stories of 11 children who, despite the difficulties, look at the world with strength, but without forgetting their scars, since every day thousands of them are exposed to the ravages of war, terrorism, poverty or climate change.

For over two years, the “Indestructible” project documented the stories of 11 children in 10 African countries, reflecting the achievements and challenges of a diverse and ever-changing continent. But this is not a photographic exhibition of "winners", even if its protagonists sometimes triumph; nor of "losers", even if some of these stories have a bitter ending.

The selection of images in this exhibition, co-financed by the Basque Government and the City of Bilbao, seeks to go beyond the hurt and negative vision of African reality and presents stories of children and adolescents as active protagonists in their lives. "Indestructible" aims to build a bridge of learning and respect towards an African childhood which, thanks to its ability to overcome and its strength, knows how to react in the face of their destiny.

The ten stories and the epilogue of the exhibition, consisting of 44 photographs, are a window on a complex Africa; on a continent, or part of it, that changes and transforms itself. This exhibition is a journey through a young, energetic and dynamic territory, full of people who move forward as best they can. And that, when things go wrong, they try to be "indestructible" and to move forward.

The authors, Alfons Rodríguez and Xavier Aldekoa, make a journey through 10 countries of the African continent and show the life and opportunities of Africa; and how, despite poverty, disease, violence, inequality ... African children look at the world with optimism, with the desire to move forward, to live and to improve.

These are stories like that of Margaret who, despite having had to get married at 13, struggles so that this should never happen to any other girl; or Joad, who works for hours in the family garden, but hasn't stopped going to school, since he wants to become a doctor; or the street children of Beira, Mozambique; or the stories of the violence suffered by minors in the Democratic Republic of Congo; stories of hunger in Mali ...

"But always with a realistic and positive message", explain the artists.