Italy – Students keep up with online learning through tablets, support from donor funding 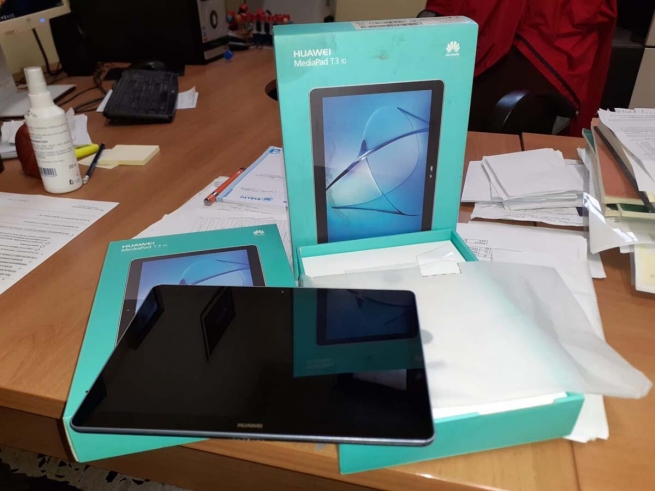 (ANS – Palermo) – Forty students attending the Salesian oratory in the community of “Santa Chiara” in Palermo, Italy, had access to school supplies, including tablets for online learning as well as pens, pencils and notebooks thanks to donor funding from Salesian Missions, the U.S. development arm of the Salesians of Don Bosco. The funding also covered the costs for sanitizing gels, a machine to sanitize rooms and food for the families of the children at the oratory.

Most of the children attending the oratory are ages 6-15 and come from families that are low income. Most of their parents are unemployed or illegally employed, some of the children’s fathers are in jail or under house arrest. Twelve families were supported through this initiative.

Giuseppe, who is 9, was one of the students supported. He lives in a small home with his parents who do odd jobs to make a meager income. When his family tested positive for COVID-19, he had to remain home in quarantine for 20 days and missed school. Salesian missionaries were able to provide him with a tablet so he could continue with his schoolwork during this time. He was able to connect with online lessons and not miss any days of school or fall behind his peers.

“Providing ongoing support to families in need is especially important during this time,” said Father Gus Baek, director of Salesian Missions. “Through donor funding, students were able to continue with their lessons and have the supplies they needed to fully engage in their school work. The nutritional support also helped ensure that they were well fed and ready for their school lessons.”

Salesian programs across Italy help youth who are unable to attend school and others who drop out to work at the few jobs available to them. A growing number of children work as laborers on farms and others have turned to the sex trade to help support their families. Those in poverty often live without adequate shelter, hot water, regular meals and health care.

Young people who are unemployed and not in school or training programs represent 20 percent of the population in Italy. Vocational training is an educational path that serves as a highly effective bridge between work and school.

Italy, Europe’s third-largest economy, has close to 2 million children living in poverty, according to UNICEF. The poverty rate has risen in the wake of Europe’s economic crisis. Unemployment is at its highest level since the late 1970s with the overall jobless rate at 12.5 percent and youth unemployment as high as 41 percent.

According to UNICEF, a growing number of youth are living away from their families in temporary shelters and within government and charity programs because of inadequate support from or neglect by their families. Salesian programs work to combat these challenges by providing shelter, nutrition, education and workforce development services for youth in need.