Brazil – Extraordinary Visit marked by moments of faith and sharing 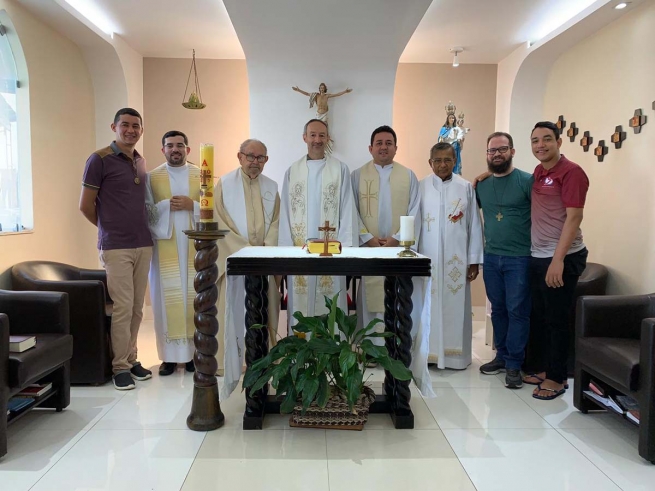 From the 18th to the 23rd, the Regional Councilor stopped in Salvador to learn more about the rich Salesian presence in the capital of the State of Bahia. After enjoying a first tourist-spiritual taste of the city on 17 April, Fr Romero began his visit on the morning of Sunday 18 with the Eucharist in the Shrine of Mary Help of Christians and a subsequent first meeting with the members of the local Salesian Family at the Salesian Lyceum.

The following day he concentrated on animating the Salesian community. Fr Romero shared and highlighted with his confreres some important points linked to the 28th General Chapter, especially in the development and life of the Educational-Pastoral Community (CEP). Furthermore, he underlined the dimension of evangelization, with the aim that Salesian action should not be reduced to mere assistance, and the importance of the Salesian sacrament of presence. After the group meeting, the Visitor began individual conversations with the individual religious.

On Tuesday 20 April he learned about the Salesian Institute more in depth, spent time in dialogue with teachers and staff, then, through the Meet platform, he also chatted with some groups of students, and finally he met with the Pastoral and Pedagogical teams.

A completely similar program, but dedicated to getting to know the reality of the Salesian high school in Salvador, took place two days later, on 22 April. The following morning the Regional Councilor left for Aracaju, in the State of Sergipe. After a few days of rest there, from 29 April to 1 May the Visitor was in Matriz de Camaragibe, in the state of Alagoas. Among the various events held over the four days, the following should be noted: the meeting with the Salesian Family, during which Fr Romero, with an attentive and open heart, encouraged all present to tell a little about their activities; the one with the various pastoral groups and movements active in the local parish; meeting with the archbishop of Maceió, Msgr. Antônio Muniz; and with the young people of the oratory; and with the members of the "Bom Jesus Philharmonic".

Finally, on 2 May, Fr Romero reached the municipality of João Pessoa, capital of the state of Paraíba, and on that same day presided over a Mass for the young people who animate that Salesian presence.

The Regional Councilor remains on a visit to João Pessoa until today, May 6.