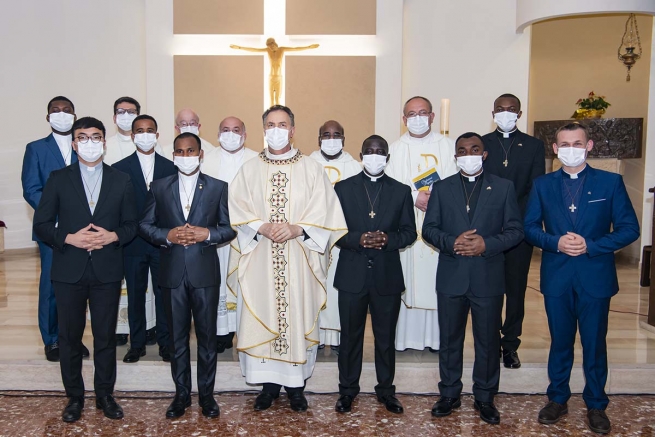 (ANS - Rome) - On the day on which the Salesian Family commemorates Saint Dominic Savio - yesterday, 6 May - and in the church dedicated to him in Rome, the Rector Major, Fr Ángel Fernández Artime, presided at the Eucharist wherein he welcomed the perpetual vows of eight young Salesians from 4 different continents.

To concelebrate together with the Rector Major were: Fr Maria Arokiam Kanaga, Superior of the Vice Province "Maria Sede della Sapienza" of the Salesian Pontifical University (UPS); Fr Nicolussi, confessor of the community and former General Councilor for Formation; the Director of the community, Fr Adam Kazimierz Homoncik; and other Salesians.

During the homily Fr Á.F. Artime touched on several points to try to summarize, even in a short time, the cornerstones of Salesian life: a life fully dedicated to God and to young people. He first recalled the profound meaning of perpetual profession as a complete donation to God. "If God is not in the center of the heart, sooner or later fatigue devours us, life burns us". This is why he invited the eight Salesians to ask God that "the covenant be strong, firm and lasting".

Then, recalling his dream "of a Congregation made up of happy Salesians of Don Bosco", he spoke of Salesian community life as an opportunity for happiness, and invited them to assume "Don Bosco's humanity" towards poor young people, without being satisfied of a "comfortable" life.

"Dear young confreres, you offer your life to God to live it with true passion, with that humanity that lets itself be struck by the pain of others," he added, underlining that only in that way can the risk "of becoming an Elite Congregation" be avoided.

Subsequently, he highlighted the priority of Salesian consecration over the priestly or lay dimension of one's own vocation; and he illustrated the Salesian's Cross as a symbol that constantly reminds us of the model to which the Salesians are called to conform: Jesus the Good Shepherd.

Finally, he highlighted how the community and the fraternity are part of the charismatic heritage of the Congregation, and he underlined the "prophetic sign" constituted by the richly multicultural presence of the new Salesians for all time.

In fact, the eight new perpetually professed, formed in the "Blessed Zeffirino Namuncurá" community in Rome, at the Gerini Theological Studentate, are a small representation of the cultural and geographical variety of the entire Congregation: they come from Asia (East Timor, Sri Lanka, South Korea), the Americas (Haiti, Brazil), Europe (Poland), and Africa (Tanzania, Rwanda, Madagascar).

The Eucharist, celebrated in full compliance with anti-Covid-19 security measures, was streamed live on the Facebook page of the Theological Studentate community, and is therefore still visible here.