Myanmar – A blessing for a troubled country: MYM Province is blessed with 8 more New Novices 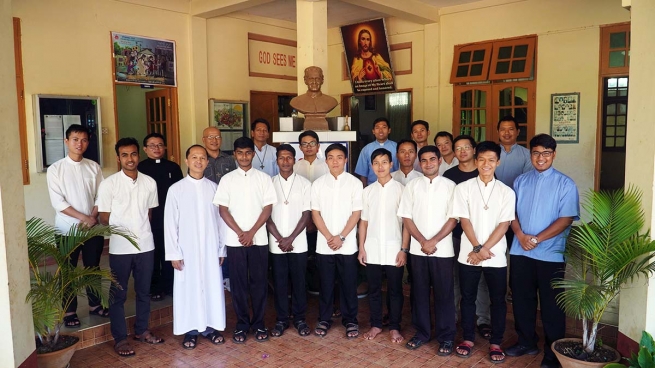 (ANS - Pyin Oo Lwin) – It has now been over 100 days since the Coup d'Etat that halted Burma's fragile democratic development. While there are 783 Burmese citizens killed and 3,859 people arrested as a result of the protests, a reason for hope in the Salesian "Mary Help of Christians" Visitatory of Myanmar (MYM) is given by 8 new Novices.

In the afternoon of 5 May 2021, Fr Bosco Nyi Nyi, the Superior of the Vice Province of Myanmar, led the ceremony of acceptance of the New Novices. The ceremony was held at Don Bosco Pyin Oo Lwin, where the Novitiate is opened for a year.

The Novitiate community of the Vice Province was suppressed in 2016 and the Novices were sent to Cebu, Philippines, for their Novitiate. At present, there are three Novices in Cebu. With them, the Vice Province of Myanmar has eleven Novices. However, the Covid-19 has created travel restrictions and the Pre-Novices who were to go to Cebu could not leave the country. The Provincial and his council requested the opening of the Novitiate to the General Council and the permission was granted and Fr Mariano Soe Naing was appointed as the Novice Master. So, today the Vice Province is overjoyed with the hope of growth in number because there was no new professed member for the past five years in the Vice Province. There is also hope that in the future the Novitiate formation be in the Vice Province.

The ceremony was graced with the presence of provincial councillors and the Salesian clerics who are entering the specific of formation as students of theology.

At present, Vice Province of Myanmar has eleven Novices, three in Cebu and eight in Pyin Oo Lwin, Myanmar. The quantity of Novices enthuses MYM to looks at the future with joyful hope in the midst of political chaos and challenges.