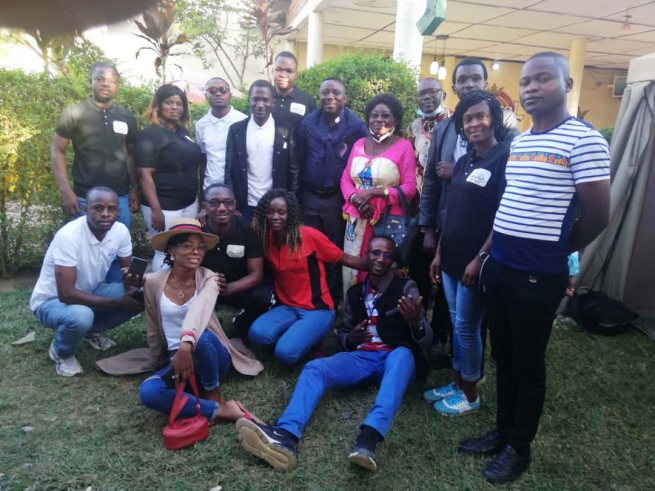 (ANS - Lubumbashi) - To mark World Press Freedom Day, journalists, broadcasting animators and managers of "Radio Don Bosco" of Lubumbashi, in the Democratic Republic of Congo, gathered last Sunday, May 9, for a day of sharing in the space "Pelouse synthétique", in the center of Lubumbashi.

The festive day, with dances, fraternity dynamics and shared moments of dialogue and discussions, was promoted by the general management of the radio in honor of all the staff. The event also provided an opportunity for the radio station's staff to meet the new Director, Fr Jonas Yav, who takes over from Fr Donatien Banze, called to carry out other pastoral tasks for the Province of Central Africa (AFC).

During the moment of mutual acquaintance, each staff member presented himself and his function within the radio. Fr Jav then intervened, praising the family spirit present in the Salesian radio team, "this conviviality, this spirit of Don Bosco must animate us every day". Then, after recalling that it is necessary to be "missionaries 24 hours a day", he recounted the processes that led him to be appointed Director of the radio station.

World Press Freedom Day is celebrated every year on May 3. The anniversary was established in 1993 by the General Assembly of the United Nations on the recommendation of the General Conference of UNESCO, and for 2021 has deepened the theme: "Information as a public good".

In view of that celebration, for 20 years now, the NGO "Reporters Sans Frontières" has been publishing its World Press Freedom Index, a ranking of almost all states in the world (in the 2021 edition 180 are counted) according to press freedom within them. The degree of press freedom is calculated by cross-referencing experts' responses to a questionnaire designed by RSF (covering, for example, pluralism, independence, media transparency) with quantitative analysis of the number of abuses and acts of violence against journalists during the period under consideration. In the 2021 ranking, the Democratic Republic of Congo ranks 149th out of 180 countries examined.