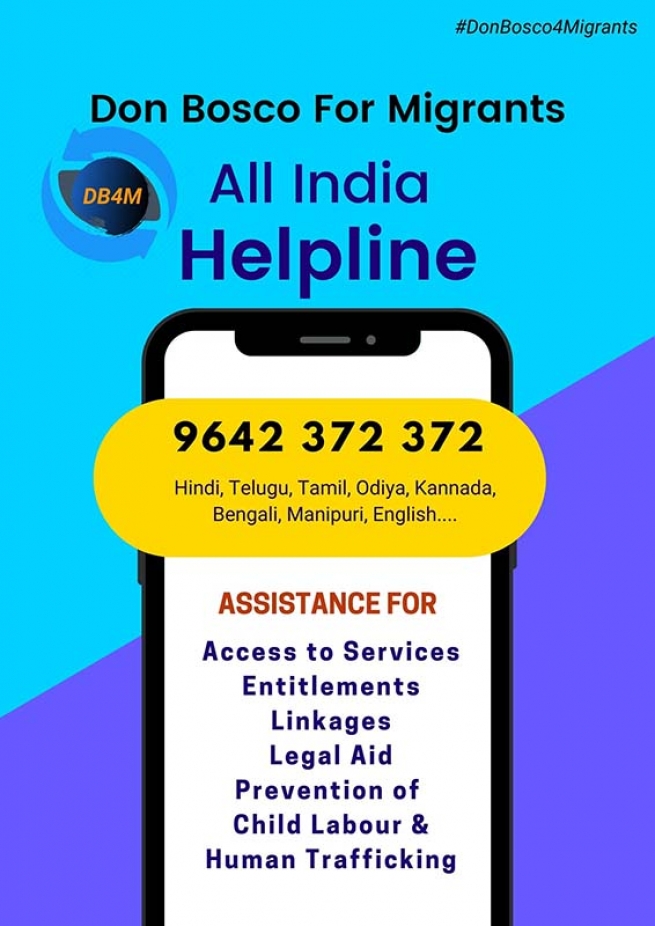 (ANS – New Delhi) – “Don Bosco for Migrants” (DB4M) has launched an all-India helpline for migrant workers: 9642 372 372. The helpline was launched by Father Biju Michael, Regional Councillor of the Salesians for South Asia Region. “We have in mind primarily our brothers and sisters who are migrant workers. But any other vulnerable or needy group can also contact us through this number. We will do the best to reach out and connect,” said Father Tony Pellissery, Executive Director of Don Bosco National Forum for the Young at Risk, at the online launch of the all-India helpline number.

Don Bosco for Migrants (DB4M) has been initiated by the Salesian Provincial Conference of South Asia for collaboration and networking of the efforts of the Salesian Family in India to reach out to migrant workers. Most of the provinces have setup “Migrants Desks” and launched various initiatives to address the plight of migrant workers. The number of Migrants’ Desks at present is 33.

Father Ratna Neelam SDB, Director of Navajeevan Bala Bhavan, Vijayawada, and member of the core team of DB4M, took the initiative to setup the helpline number. Speaking on the occasion he said that initially this number will be available to callers in Hindi, Telugu, Tamil, Odiya, Kannada, Bengali, Manipuri and English. This number currently has 15 channels which will allow the helpline operators to engage with 15 callers at the same time. More languages will be added in the coming days, he added.

Father Biju Michael Regional Councillor of the Salesians, for South Asia Region invoked the blessings of God on this initiative through the intercession of St. Joseph the worker. He remembered the call of Holy Father Pope Francis and the General Chapters 27 and 28 of the Salesian congregation saying: “How can we fail to think of all those young people affected by movements of migration”. This initiative is in answer to this call and to reach out to the poor and needy migrants.

Father Bosco Francis, Executive Director of Don Bosco for Migrants, thanked the participants and explained the details of the services that would be attempted through this helpline number. Connecting source and destination areas, legal aid, advocacy to get minimum wages, decent work and living conditions, to listen to their grievances, to assist in procuring their entitlements like Aadhaar, PDS, Health Insurance… He said this would also act as a “watch” against child labour, bonded labour and human trafficking. All efforts would be taken to connect the migrants to services during this pandemic.