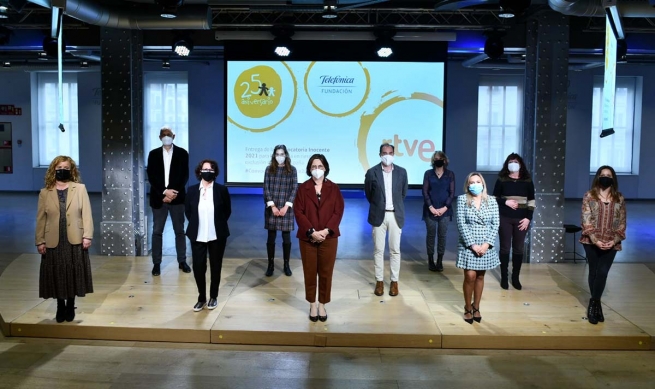 (ANS - Madrid) - Thanks to the donations received with the "Inocente, Inocente" Gala last December, the "Inocente" Foundation has awarded financial aid to those organizations that fight against the social exclusion of children in Spain. Among the organizations benefited there are also four of the Salesian Family: the “Don Bosco” Salesian Youth Center in the “El Pilar” district of Madrid and the “Valsé” Salesian Foundation of the Daughters of Mary Help of Christians; and the “Pinardi Federation” and the “Puertobosco” Youth Center of Puertollano, of the Salesians.

The winners were selected in the 2021 call and financed thanks to donations from the “Inocente, Inocente” Gala, which celebrated its 25th anniversary. In this edition, 91 projects were selected, which were awarded a total of more than 1.2 million euros in grants.

The event, presented by Juanma Iturriaga, was attended by the director of the Inocente Foundation, Cristina Fernández, the Director of entertainment programs of TVE Toñi Prieto, the general director of the Telefónica Foundation, Carmen Morenés, and several representatives of the organizations to which grants will be earmarked. Teresa Rodríguez Hervás, Director General of the Fundación Balia por la Infancia  said a few words of thanks on behalf of all of these.

The "Inocente, Inocente 2020" Gala was dedicated to helping all children and their families who are on the brink of poverty and social exclusion, and whose situation has been aggravated by the Covid-19 pandemic.

Thanks to the donations made by thousands of spectators during the Gala and to the members of the “Inocente” Foundation, it was possible to carry out this aid to projects dedicated to especially needy minors throughout Spain. Also, the "Inocente" awards for celebrities who support organizations working for children in Spain will soon be announced.

The Gala, presented again this year by Juanma Iturriaga, Anne Igartiburu, Jacob Petrus and Carolina Casado, was characterized by emotional surprises, the performances of the Magician Yunke, David de María and Camela, and by the collaboration of historical presenters such as Juan y Medio, Miriam Díaz Aroca and Paula Vázquez.

The "Telefónica" Foundation has been collaborating for more than fifteen years with the "Inocente" Foundation, through the participation of 350 volunteers who work as "solidarity teleoperators" - and who on this occasion worked digitally, due to the pandemic.