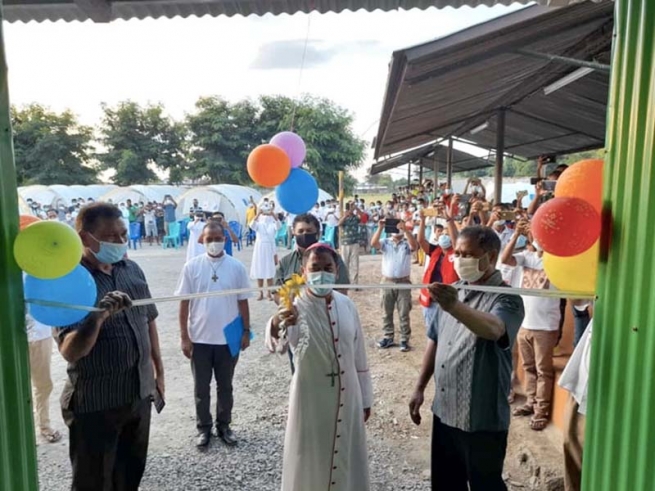 (ANS – Dili) – Last month on Resurrection Sunday, 4 April, East Timor was hit by torrential rains sparking widespread destruction across the whole island: devastating flooding and landslides have claimed the lives of more than 40 people, with some people still missing; roads, bridges, and houses have been destroyed, as the capital Dili is left under water. The floods came as a serious blow to communities facing so many challenges and hardships up until now.

The Salesian Community in Don Bosco Comoro, along with some other religious communities in Dili, have become places of emergency accommodation for thousands of citizens who have fled from their homes due to this unexpected natural disaster.

The gymnasium and classrooms were being used for emergency accommodation by more than 3000 displaced persons since their arrival at Don Bosco Comoro. Some households have been able to return to their homes, though around 40 households are still staying at Don Bosco Comoro, because their homes have been totally destroyed. In the face of these poor conditions, it was necessary to build temporary housing in order for families to have security and privacy. Therefore, after three weeks of planning and construction, the idea finally came to fruition on Sunday the 16th of May 2021, as Don Bosco Comoro celebrated the grand opening of its new temporary tents and building for refugees.

The rectangular building and the tents were built by our technical centre’s staff, along with the boarder boys and aspirants.

The inauguration ceremony of the building and tents began at 4:30pm with a welcome of the distinguished guests from the government, Church, NGOs, and flood refugees, followed by a series of speeches from the significant guests.

Afterwards, the Archbishop of Dili, Virgilio do Carmo, SDB presided over the inauguration ceremony and blessed the building and tents. After that, the refugees all made their way to their new accommodation with joy and enthusiasm. Around 200 people of all ages attended the celebration.

From the bottom of their hearts, all the flood refugees thanked the many generous benefactors and skilled construction workers who served tirelessly in providing this accommodation.

“Let us keep all these families in our prayers, for their comfort and happiness, and that they may find a new home soon,” Fr Abilio Eusebio Correia Guterres, a Timorese Salesian, comments.