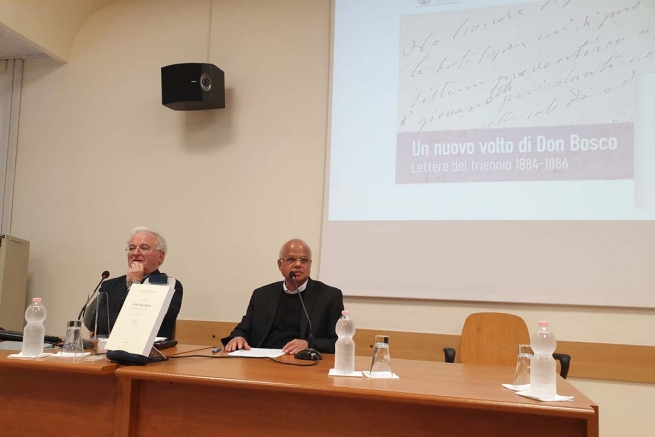 (ANS - Rome) - On Wednesday, May 19, 2021, the ninth volume of the critical edition of Don Bosco's Epistolario was presented at the Faculty of the Science of Communication of the University of Rome (UPS). This volume collects the 469 letters written by the saint in the three years between 1884 and 1886.

After a greeting from the Dean of the Faculty of Educational Sciences (FSE), Prof. Mario Llanos, SDB, who stated that he felt emotionally involved in reading the volume, the curator of the epistolary, Prof. Francesco Motto, SDB, Director of the Istituto Storico Salesiano (ISS), spoke. He illustrated the particular methodology followed in the critical edition of the letters and, through summary tables, he indicated the correspondents, the anecdotal classification, the archives consulted, the chronological and topical dates, etc., of the letters published in volume IX.

Prof. Giancarlo Cursi, sociologist and professor of Pedagogical Methodology at the FSE of the UPS, then spoke. He identified the salient features of the relationship between Don Bosco and his lay correspondents, highlighting Don Bosco's different attitude toward men and women: from being a collaborator in a shared project to a person humanly sensitive to the needs of the "orphans"; a different attitude that emerges from the very beginning of the letter, to return also in the farewell letters.

The call to Heaven, present in all the letters to the laity, is obviously at the center of those addressed to clerics, priests and missionaries, with whom Don Bosco established a paternal, soothing, merciful relationship, but also firm and aimed at the spiritual and vocational growth of the correspondent. The third speaker, Prof. Carlo Maria Zanotti, SDB, professor of History of Vocational Pedagogy and Pedagogy of Consecrated Vocations, also at FSE, dealt explicitly with this subject.

In turn, Prof. Andrea Farina, a professor at FSE and an expert in laws regarding minors and in the Legislation and Organization of personal services, captured in Don Bosco's letters the typical elements of his relationship with civil and religious authorities (emperor, ministers, mayors, pope, bishops, religious superiors...): a courageous, frank, self-confident relationship, expressed in different tones and ways according to the person and the occasion, but always attentive to the smallest details, aimed at the proposed objective: the service that the Salesian Congregation intended to offer to young people in difficulty.

The meeting was moderated by Prof. Thomas Anchukandam, SDB, Director of the ISS, and was followed in live streaming by viewers connected from various continents. It can still be viewed at the following address: https://youtu.be/l6X0wL_LKkM