Italy – Live the Vigil of Mary Help of Christians, Solemnity of Pentecost, in Valdocco 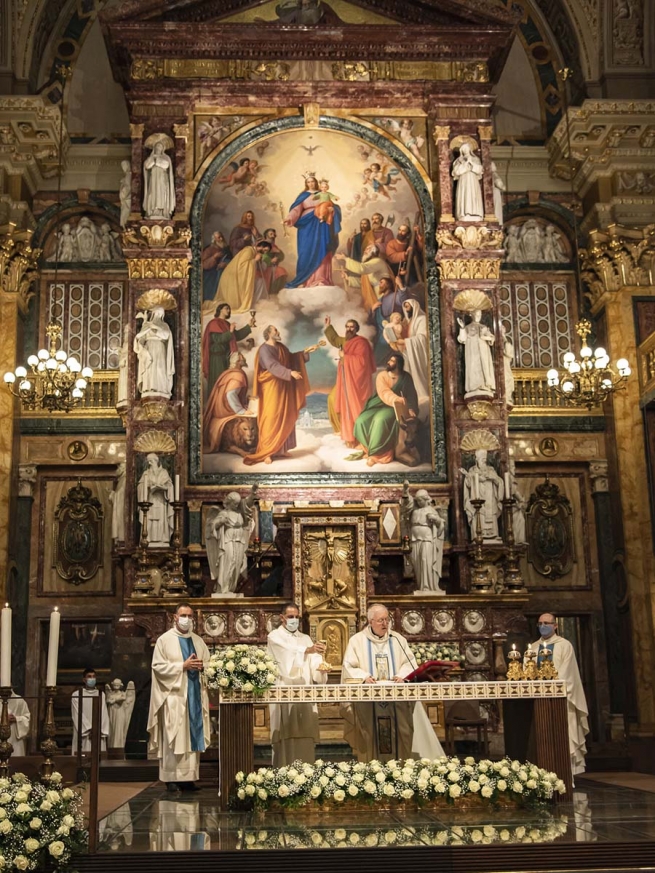 (ANS - Turin) - The eve of the Feast of Mary Help of Christians unfolds on the day of Pentecost and it is not difficult to find the two liturgical moments largely overlapping one another. This is what happened this year, thanks to the closeness of the calendar that did not sacrifice either the preparation of May 24 or the solemn celebration of the gift of the Holy Spirit to the community of the apostles. The program that the Salesians have lived all over the world, which had its fulcrum in the Valdocco spaces, implemented this synthesis.

The Salesian Family (SF), gathered around the Rector Major, Fr Ángel Fernández Artime, and led by its Central Delegate for the SF, Fr Joan Lluís Playà, convened at the Mother House of Valdocco in a physical and virtual way via digital for its Consulta, or World Council, on 21-23 May. It was a moment to address organizational and program aspects, but always dictated by the awareness of being above all an expression of the industriousness of the Spirit of God.

As Fr Playà himself remarked in his homily for the Eucharistic celebration at the end of the morning (streamed on our Facebook page), "the Holy Spirit is a fire that purifies, a fire that excites. Those who hear its sound cannot remain indifferent. Yesterday it threw open the windows and doors of the Cenacle. Here, it inflamed the heart of Don Bosco and the heart of the first generation of Salesians, Daughters of Mary Help of Christians, Salesian Cooperators and devotees of Mary Help of Christians. Now it's our turn.”

Shortly before, the Pope from St. Peter had turned his thoughts to the Salesians and the FMA who work for those who are far away, for the marginalized, for the young, asking for the blessing of the Father with many holy vocations so as to proceed on this journey.

The archbishop of Turin, Msgr. Cesare Nosiglia, who celebrated the late afternoon Eucharist in the basilica of Valdocco, echoed the same invocation. “Don Bosco affirmed that one in three young people had in their hearts the desire to dedicate their whole life to the Lord in the priestly ministry or in the consecrated life. And for this, he invited us to pray to Mary Help of Christians to help these young people to have the courage to respond positively to this invitation.”

In the evening there was the last appointment of the novena for the Marian feast, with the Rector Major who expressed the traditional "goodnight" in the courtyard of Valdocco. A space that made it possible to experience the rosary with a particular familiarity. “Everything here speaks of stories of a passion for education and evangelization,” commented the Rector Major.

It is the passion that accompanied the holy man to the end who, as his life drew to a close, after the effort of erecting the church of the Sacred Heart in Rome, was moved celebrating the Eucharist at the altar dedicated to Mary Help of Christians. Having stopped for 16 times during the liturgy, the Rector Major recalled, at the end he confided to one of his confreres: “Today I understood what Our Lady told me at the Becchi at the age of 9.”