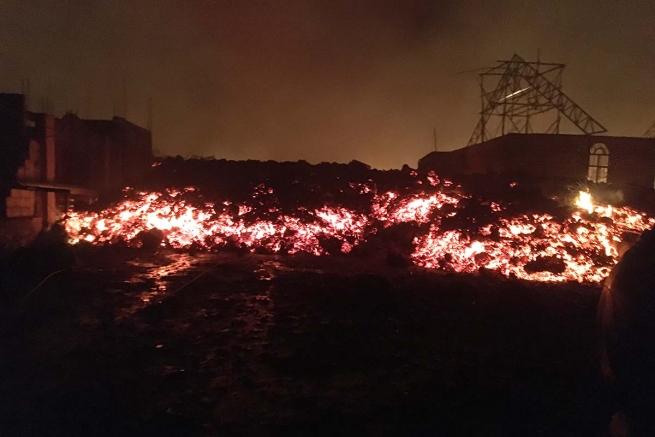 (ANS - Goma) - The "Don Bosco Ngangi" Center of the Salesian Province of Central Africa, in Goma, in the east of the Democratic Republic of Congo, urgently calls for national and international solidarity: last Saturday 22 May, in fact, the Salesians of Don Bosco of the “Don Bosco Ngangi” Youth Center were surprised, like all the inhabitants of Goma, by the volcanic eruption of Nyiragongo, around 18:30 local time.

The volcano had not erupted for over 19 years. The latest eruption, on 17 January 2002, killed more than 100 people and covered almost the entire eastern part of Goma with lava. Remembering the devastation of that circumstance, thousands of people fled their homes, taking refuge in Gisenyi, in neighboring Rwanda, or in Sake, 25 km away, in the Democratic Republic of the Congo. According to Unicef, last Saturday's eruption has so far caused the death of 15 people; in addition, 159 children were still missing as of last Monday.

The eruption also directly affected the presence of the Salesian Family in the city. At around 11.30 pm the Salesians, the Salvatorian Sisters and the Daughters of Mary Help of Christians had to bring out from the complex, with the means at their disposal, all the children of the "Maison Ushindi" orphanage and the young residents of the "Saint Kizito" Institute".

“A miracle happened, because the lava flow from the nearby volcano stopped a few meters from the Don Bosco Ngangi Center,” say the Sons of Don Bosco.

Today the Don Bosco Ngangi Youth Center has to accommodate almost 250 children in two transit sites: the "Maison Maman Marguerite" with about 135 girls and small children, and the "Maison Gahinja" with about 95 children and boys from 0 to 19 years. The conditions in which these children are housed are precarious. No water, no electricity, no space to play, not enough food. "One wonders how long this situation will last!," the Salesians of Goma complain.

The young people who live in Salesian works hope to find urgent help from the Salesians. Their families are waiting to be able to start over and are confident in emergency humanitarian interventions.

And in addition to the dead, the wounded, the missing and the displaced, there is also the damage count for the hundreds of houses and goods reduced to ashes.

The eruption of the Nyiragongo volcano represents yet another disaster in a region already tried by the recent Ebola epidemic, the Covid-19 pandemic, the indiscriminate killings of last month (Ngangi, Majengo, Turunga and Buhene) ... And now the tremors continue to frighten city dwellers, especially young children and other vulnerable people.

Faced with this new situation of hardship, the Salesians of Don Bosco of the community of Ngangi-Goma launch a moving appeal to people of goodwill to come to the aid of vulnerable children and young people under their responsibility and to the numerous families affected by the disaster constantly knocking on their doors.